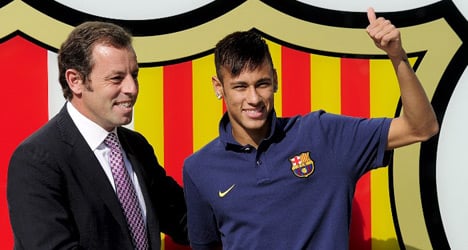 Prosecutors accuse Barcelona, who have a narrow lead at the top of the Spanish football league, of irregularities in the €86 million ($118 million) deal — which the club denies.

Judge Pablo Ruz at Madrid's National Court "indicts FC Barcelona for a crime against the public treasury in relation to the signing of the Brazilian player," said the source, citing a court ruling.

The judge ordered tax authorities to hand over the club's tax returns for 2011 to 2013, according to the ruling.

He sought to establish whether or not Neymar, who joined Barcelona in May 2013, was counted as a taxpayer in Spain or his native Brazil that year.

The judge also asked tax authorities to provide information about the taxing of deals linked to Neymar's signing and about how much may have been "defrauded".

He ordered Neymar's father to hand over contracts and documents from various companies linked to the signing.

The judge saw "sufficient evidence to investigate a possible crime against the public treasury by Barcelona football club", according to the ruling.

State prosecutors have alleged that Barcelona owe the taxman a total of €9.1 million ($12.5 million) in deals to bring the player to the Spanish champions from Brazilian club Santos.

Prosecutors said on Wednesday that there were "a suspicious number of simulated contracts".

Barcelona insisted that they have not broken the law at any point during the deal and signalled their intent to clear the club's name.

"The club's dealings with respect to this operation, and in light of all information available, were at all times in line with the relevant legal legislation," they said in a statement.

The case was started by one of Barça's own members, Jordi Cases.

He accused Rosell of misappropriation for not declaring publicly that 40 million of the 57.1 million figure quoted by Barça was paid to N&N, a company controlled by the player's parents.

Following Rosell's resignation, the club revealed that the entire cost of the operation including Neymar's signing bonus, commissions, marketing deals, a donation to the player's foundation and other agreements totalled €86.2 million.

State prosecutors in Brazil have also called on its tax authorities to investigate potential tax fraud.

Earlier this month in an uncharacteristic blast, Neymar himself reacted angrily to the controversy.

"I've been quiet until now! But I can't go on listening to all these things about my transfer," he wrote on the social media network Instagram.

"A lot of people come out and talk a load of rubbish — calling our character into doubt," he wrote.

"I also understood we have masses of false friends."

On the field the 22-year-old's first season in Spain has been disrupted by injuries.

However, he has managed 12 goals in 28 appearances to date and was involved as a substitute as Barça beat Manchester City 2-0 in the first leg of their Champions League last 16 tie on Tuesday.

Barcelona are just ahead of their fierce rivals Real Madrid in the Spanish league on goal difference but tied on points with Real and Atletico Madrid.