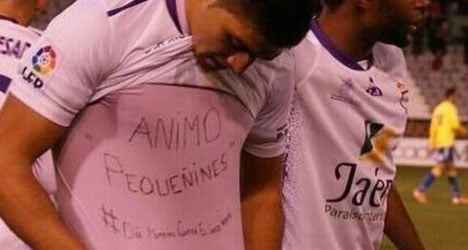 The player wore the shirt to publicize International Childhood Cancer Day, being held on the same date as the match. Photo: Twitter

Underneath his official team strip, the player was wearing a t-shirt on which he had used a pen to write the words "Courage, little ones. International Childhood Cancer Day," in support of the global campaign which was taking place on the same day as the match.

The striker, who has already scored 12 goals this season, wanted to encourage people to donate to the cause.

But his gesture led to a contribution of a different kind when he was fined €2,000 by the Spanish  Football  Federation, according to Spanish daily 20 Minutos.

"I'm surprised because my only objective was to support children on International Childhood Cancer Day, which was also happening last Saturday, February 15th," he said on Wednesday.

"They called me to tell me they'd fined me, then the club confirmed it," said the Malaga-born player who holds a Honduran passport and could play for that country in the forthcoming World Cup.

Article 91.1 of the Federation's rules states: "Any player who, while celebrating a goal or for another cause related to the match, lifts his shirt to display any publicity, slogan, acronym or drawing, regardless of the nature of their contents or goal of their action, will be sanctioned as the author of a serious offence and fined with a sum between €2,000 and €3,000."

The clause has been criticized by some fans who claim that it "dehumanizes" the sport.

Barcelona star Leo Messi was once fined under the same regulation for revealing a "Happy Birthday, Mum" message.

But there may be hope for Jona.

José Callejon fell foul of the law in 2010 after showing a t-shirt dedicated to the memory of his  deceased teammate Dani Jarque, but his fine was overturned by an appeals committee who decided that the action "should not be the subject of a disciplinary procedure" because of its "exceptional nature" and the fact that it was "not intended to publicize anything or send a political or religious message".