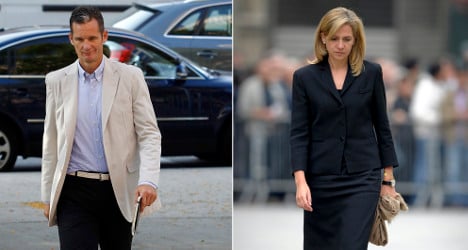 Princess Cristina replied "I don't know" some 182 times during her six and a half hours in the stand in a Majorca court room on February 8th, a transcript released on Thursday shows.

The document also reveals that the 48-year-old royal used the phrase "I don't remember" on 55 occasions and "I don't know anything about that" 52 times, Spain's El País newspaper reported.

The embattled princess also replied "No" to the question "Did you know that?" on numerous occasions.

Cristina's evasive answers came in response to some 400 questions from Majorca judge José Castro who is investigating the princess for possible fiscal fraud and money laundering via Aizoon, a company she jointly owns with her husband Iñaki Urdangarin.

Neither Cristina nor her husband have been formally charged with any crime.

During her appearance in court earlier this month — the first by a member of Spain's royal family — Cristina said she had never had any control of the accounts of Aizoon, and had had nothing to do with the company.

"I trusted my husband completely and accepted what he suggested," said the princess who is seventh in succession to the Spanish throne.

"I took care of the children and my husband looked after costs," Cristina added.

The scandal has rocked Spain's royal family which has seen its popularity plummet in recent times.