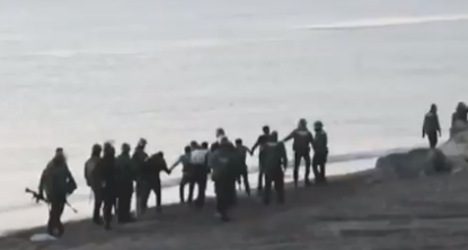 Ricardo Sixto, a spokesperson for the group which represents a broad alliance of left-wing and environmental interests, said the minister should step down as a result of the action taken by Civil Guard officers during the incident in Ceuta.

Those officers fired rubber bullets at immigrants trying to attempting to swim around a breakwater to reach land in Ceuta, although the force claims no one was injured by the shots.

The parliamentary protest by the IP is the latest incident in a political row that continues to destabilize relations between Spain's two largest parties.

Spanish Prime Minister Mariano Rajoy has continued to defend the Civil Guard while the leader of the opposition socialist PSOE party recently called for the head of the Civil Guard in Ceuta to step down.

The Civil Guard will hand videos of the tragic incident to a court in Ceuta, the Interior Ministry said on Wednesday.

The PSOE, meanwhile, is calling for five hours of footage to be made available to the national parliament.  The party has demanded that those videos be handed over within 24 hours, saying it would launch an parliamentary investigation into the incident if this did not happen.

As many as 30,000 would-be migrants are currently in Morocco hoping to enter Europe, with Ceuta and Melilla — which have Europe's only land borders with Africa — considered the main potential points of entry.