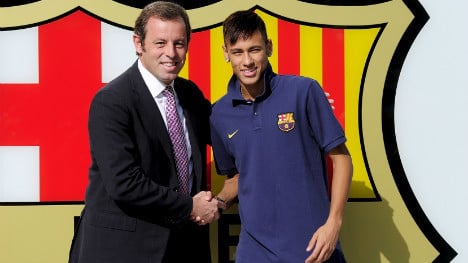 The prosecutor believes Barça owe the taxman a total of €9.1 million (€12.5 million, £7.5 million) in two agreements reached, firstly in 2011 and then finally in 2013 to bring the player to the Spanish champions from Santos.

Barcelona paid €10 million to a company controlled by the player's parents, N&N, in 2011 with the intention of signing the player in 2014.

However, they brought that plan forward by a year to complete the deal via a complicated series of contracts last May.

The indictment claims there are "a suspicious number of simulated contracts…that deserve at the very least to be investigated for a possible crime against the public purse."

Barcelona declined to comment on the matter until they have taken legal advice.

The process was started by a complaint being made by one of Barça's own members Jordi Cases against Rosell for misappropriation of funds for not declaring publicly that 40 million of the 57.1 million figure quoted by Barça was paid to N&N.

However, in a press conference following Rosell's resignation, the club revealed that the entire cost of the operation including Neymar's signing bonus, commissions, marketing deals, a donation to the player's foundation and other collaborative agreements amounted to a total of €86.2 million.

The state prosecution service in Brazil has also called its tax authorities to investigate the case to ascertain if potential tax fraud has taken place.

Earlier this month in an uncharacteristic blast, the player reacted angrily to the constant coverage over how much he cost.

"I've been quiet until now! But I can't go on listening to all these things about my transfer," he wrote on the social media network Instagram.

"A lot of people come out and talk a load of rubbish — calling our character into doubt.

"I also understood we have masses of false friends."

On the field the 21-year-old's first season in Spain has been disrupted by injuries.

However, he has managed 12 goals in 28 appearances to date and was involved as a substitute as Barça beat Manchester City 2-0 in the first leg of their Champions League last 16 tie on Tuesday.