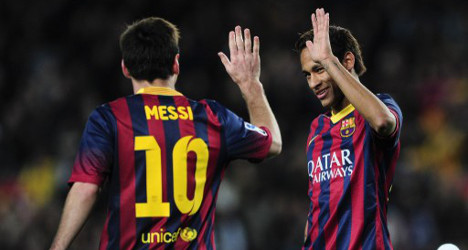 After a run of one win in four Liga games, including a rare home defeat against Valencia, the Catalan giants have won their last two matches in emphatic style, scoring 10 goals in the process.

Following a 4-1 success at Sevilla last weekend, Saturday's 6-0 demolition of Rayo Vallecano further strengthened their position at the top of the table on goal difference from Atletico Madrid and Real Madrid.

The game featured a goal-scoring return from injury for Neymar, while the team's fourth goal, a dizzying passing move finished by Pedro Rodriguez, bore the hallmarks of Barcelona's Pep Guardiola-era pomp.

Guardiola is now at Bayern Munich, who demolished Barça 7-0 on aggregate in last season's Champions League semi-finals, but with his old side having also booked a King's Cup final berth by overcoming Real Sociedad, belief is building at Camp Nou.

"Now the best part of the season, where all the games are important, is upon us," captain Carles Puyol told Barça TV.

"We played a very good game (against Rayo), as we did against Real Sociedad, and the team has plenty of confidence heading into the tie.

"We are facing a very good team with great players, but Barcelona always believe in their own chances. We are in good form and it will be a very even tie."

City could scarcely have asked for more daunting opposition in what will be their first ever knockout game in the post-1992 Champions League era, but Manuel Pellegrini's side can also take heart from their weekend result.

After a run of two games without victory, the 2012 English champions produced a superb display at the Etihad to beat Chelsea 2-0 in the fifth round of the FA Cup.

believes it was ideal preparation for the visit of Barcelona.

"It is a massive game," said the French midfielder, who was making his first appearance after a five-week lay-off with knee ligament damage.

"Every player wants to play those kind of games — Champions League, last 16, against Barcelona. The good thing is we are really strong. We have our confidence back.

"I think they are weaker than they were two years ago. I think it is going to be a tight game and an interesting game for everyone."

Nasri will hope that his second-half cameo against Chelsea convinces manager Pellegrini to hand him a starting berth, but he faces competition from Jesus Navas.

With James Milner suspended and Fernandinho a doubt with a thigh problem, Javi Garcia is in line to partner Yaya Toure in midfield, while top scorer Sergio Aguero is expected to miss out with a knee injury.

Barcelona coach Gerardo Martino has the rare luxury of a fully fit squad to choose from.

Despite demonstrating his fitness in the romp against Rayo, Brazil superstar Neymar is expected to start on the bench, but Xavi is likely to come back into the side after being rested on Saturday.

With Lionel Messi having amassed 10 goals in 11 games since his return to fitness in January, Pellegrini feels that reports of Barça's demise have been greatly exaggerated.

"Any coach would love to have the roster that Barça has," said the former Real Madrid and Malaga coach.

"They have been leading the Primera Liga standings, they are alive in the Champions League, and they are in the final of the Copa del Rey."

The two teams have never previously met in a competitive fixture, but Barca provided the opposition when City opened their City of Manchester Stadium — subsequently rechristened the Etihad Stadium — in August 2003.