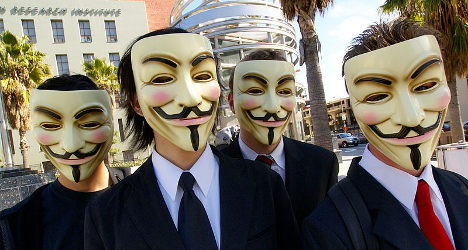 Members of the hacker collective Anonymous demonstrate outside a Scientology building in Los Angeles in 2008. File Photo: Wikimedia

A group linked to Anonymous hacked the website of the Spanish Newspaper Editors Association (AEDE) at around 5pm on Monday.

The 'hacktivist' group known as La Nueve called for people to boycott the member sites of AEDE, an association which represents all of Spain's major national newspapers as well as many regional and specialist publications .

"The media outlets that belong to this association only represent the interests of those who are exploiting the weakest (members of society)," said the hackers in a message posted on the AEDE homepage.

The hackers then called on people to "neither follow nor link to" the media companies represented by AEDE.

The cyber action comes in the wake of the Spanish Government's unveiling of a new draft Intellectual Property Law which would see search engines such as Google having to pay to post sections of copyrighted material — a proposal that follows similar plans in countries including France and Germany.

Search engines currently fill their coffers by positioning advertising alongside third-party content, and struggling media firms are hoping to take home a greater share of this online revenue.

The draft Spanish law would see search engines and content aggregators having to pay an "equitable fee" for use of this content.

The proposed legislation has been warmly welcomed by AEDE but the backlash is clearly visible on sites like Meneame — the Spanish version of major US site Reddit which relies on readers voting in favour of user-supplied content.

Links to content on AEDE sites are currently being 'voted down' by readers in protest against the new media law, Spain's 20 minutos newspaper reported on Tuesday.

Spanish newspapers have shed some 9.500 journalists in the last few years with advertising revenue plummeting during the country's crisis.