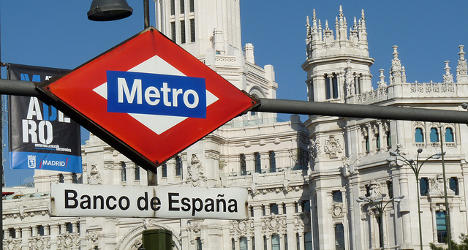 Doubtful loans — those at risk of not being repaid — rose in December to 13.6 percent of all credit extended by Spanish banks, up from 13.07 percent the previous month, a Bank of Spain report showed.

It was the highest bad-loan ratio since records began in their existing form in 1962.

The bad loans in December amounted to €197 billion, up from €192.5 billion in November.

Spanish banks are burdened by bad loans made during a decade-long property bubble that burst in 2008, tipping the nation into recession and throwing millions out of work.

Despite shoring up their balance sheets with a €41.3-billion rescue loan from Spain's eurozone partners, the banks' bad-loan levels have broken new records month after month.

Under the programme, Spanish banks have transferred many of their dodgy assets to a "bad bank", called Sareb, which aims to pool the bad assets and sell them at a discount.

But the bad loans, mostly linked to the property sector, remain a deep concern.

In December, the European Commission warned Spain to be vigilant as the bailout winds up, saying the sector was on the way to recovery but economic risks remained.

Spain crawled out of recession with 0.1-percent economic growth in the third quarter, and Economy Minister Luis de Guindos has estimated fourth-quarter growth of 0.3 percent.

Economists say the unemployment rate — 26 percent in the fourth quarter of 2013 — will remain painfully high for years to come.