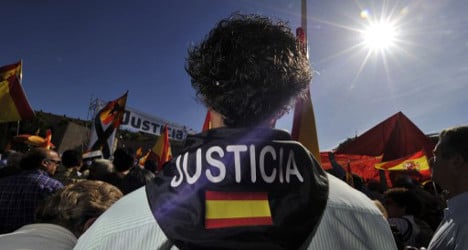 A man wears a scarf calling for justice for members of the Basque separatist group Eta at a rally in Madrid in October 2013.

They are also calling for eight members of Eta to be tried for similar charges in the court in The Hague.

Covite claim these 11 people headed up "a systematic attack against the civilian population" in Spain's Basque Country, Spain's 20 minutos newspaper reported on Monday.

Eta and Batasuna committed 292 "selective assassinations" after Spain ratified the Rome Statute of the ICC, said Covite in a detailed document provided to the court in the Netherlands.

Some 40,000 people a year where victims of persecution while ten percent of the Basque population left the region, the group added.

But Covite stressed these crimes have never been investigated.

"These actions against human rights could constitute a crime of genocide because they were perpetrated with the intention of destroying completely or partially a national, ethnic or rational group," Covite said in their document.

Eta is blamed for the deaths of 829 people during a 40-year campaign of shootings and bombings for an independent Basque homeland in northern Spain and south-western France.

In October 2011 it announced a “definitive end” to armed activity but it has not formally disarmed or disbanded as the Spanish and French governments demand.

Both governments have refused to negotiate with Eta, which is classed as a terrorist organization by the European Union and the United States.

Batasuna (or 'Unity') was outlawed in 2003 after a court ruled the party was financing Eta activities with public money.

In October, the Strasbourg-based European Court of Human Rights issued a controversial ruling that that Spain had acted illegally by retroactively cutting short the years of remission that Eta prisoner Inés del Río Prada had earned from good behaviour.

This ruling has since led to the release of many Eta prisoners.