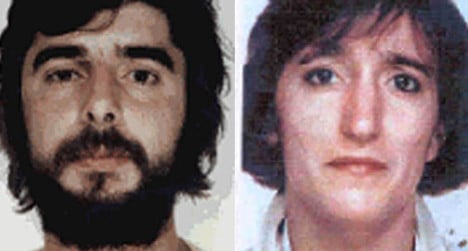 Goni and Alberdi joined an ETA unit in 1990 that was charged with carrying out attacks on Spain’s Mediterranean coast ahead of the 1992 Olympic Games in Barcelona. Photo: YouTube

The pair, a man and a woman who have been on the run from the authorities for over two decades, were detained in the Pacific tourist resort of Puerto Vallarta by Mexican police, the Interior Ministry said in a statement.

Juan Jesus Narvaez Goni and Itziar Alberdi joined an Eta unit in 1990 that was charged with carrying out attacks on Spain’s Mediterranean coast ahead of the 1992 Olympic Games in Barcelona, the statement said.

“Until this unit was broken up, on March 21, 1992, and in just one year, this unit carried out several attacks with explosives and firearms, with the tragic toll of 18 murders and several serious injuries,” the statement said.

Of the Eta members still on the loose, the pair were responsible for the greatest number of murders, the ministry said.

Eta is blamed for the deaths of 829 people in a four-decade long campaign of shootings and bombings for an independent Basque homeland in northern Spain and southwestern France.

In October 2011 it announced a “definitive end” to armed activity but it has not formally disarmed or disbanded as the Spanish and French governments demand.

Both governments have refused to negotiate with the Eta, which is classed as a terrorist organization by the European Union and the United States.

The group has been severely weakened in recent years by the arrests of its senior leaders in Spain and France and experts estimate there are only a few dozen active members still at large.

British police on Thursday arrested a convicted killer from the group in London who is wanted by Spain.