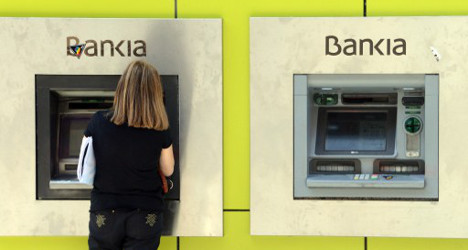 Under the terms of the European Union's 2012 bailout, the Spanish government has until 2017 to sell its 68 percent stake in Bankia. Photo: Dominique Faget/AFP

Bankia became the symbol of Spain's financial crisis when it lost more than €19 billion ($26 billion) in 2012 and pushed the government to ask its eurozone partners for €41 billion in rescue loans to shore up the entire banking system.

Under the terms of the European Union's 2012 bailout, the Spanish government has until 2017 to sell its 68 percent stake in Bankia.

"It would be reasonable for the privatization process to be similar to what is being carried out with Lloyds. That is, that it be carried out in phases and take two or three years," Bankia president Jose Ignacio Goirigolzarri said in an interview published in daily newspaper ABC.

He was referring to the British government's sale of six percent of Lloyds bank in September, five years after the state rescue of the lender.

Earlier this month Lloyds, which is now 33-percent owned by the British taxpayer, said it was preparing for a possible second sale.

The Spanish government will first put smaller stakes in Bankia up for sale, Goirigolzarri said.

"The first stakes will be smaller then the following ones. We have to think of starting with between five and 10 percent," he said.

Bankia earlier this month reported a net profit of €509 million for 2013, after a catastrophic €19.2-billion loss the previous year, and announced it had wrapped up a painful restructuring two years early.

The results marked a dramatic turnaround for Spain's fourth-largest bank by market value, which was born in 2010 from the merger of seven troubled savings banks.

After listing on the Madrid stock exchange with great fanfare in July 2011, Bankia had to be nationalized less than a year later, in May 2012, to save it from collapse as bad loans and losses spiralled.

Spain then turned to its eurozone partners for €41 billion in rescue loans to shore up the entire banking system.

Bankia has had to shut more than 1,000 branches and shed thousands of staff in a restructuring.