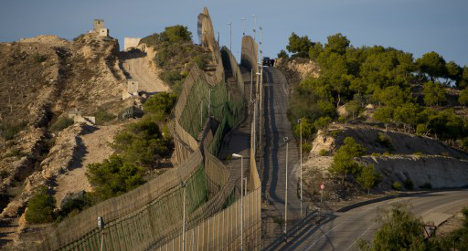 The 'assault' on the border comes soon after at least 14 migrants drowned trying to swim to the Spanish enclave of Ceuta from a beach in neighbouring Morocco. File photo: Pierre Philippe Marcou/AFP

Once in the city, the men from Sub-Saharan Africa separated into smaller groups, "presumably" heading for the CETI refugee transit centre, the national daily said.

Some chanted "Barça! Barça" as they ran through the city streets.

The 'assault' on the border between the Spanish city of Melilla and Morocco comes soon after at least 14 migrants drowned trying to swim to the Spanish enclave of Ceuta from a beach in neighbouring Morocco.

Spanish authorities initially denied shooting rubber bullets at the migrants in the water, but later admitted they had done so. They stressed, however, that no one had been injured by the projectiles.

The EU is now calling for Spain to explain why rubber bullets were used with the EU Commissioner for Home Affairs, Cecilia Malmstrom, saying she was "very concerned".

Melilla and Ceuta have Europe's only land borders with Africa. Spanish authorities say some 30,000 would-be migrants are currently based in Morocco in the hope of entering Europe illegally.

Most of these people hope to enter via  Melilla and Ceuta, El País reported police sources as saying.

The issue of clandestine migration from Africa to Europe has been in the spotlight since at least 232 asylum seekers died when their boat caught fire and sunk off the coast of the Italian island of Lampedusa.