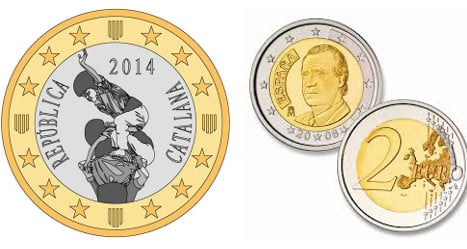 The first batch of coin cases has proven to be such a success that the only ones now available are on eBay for three times the original price of €10. Photo: monedesrepublica

The 'limited edition' coins, which number 8,000 so far, have been minted in China and are being sold through an anonymous Facebook page.

Although the 'Catalan' two and one euro coins have the same dimensions and metallic composition as any of those used across Europe, they differ from the Spanish version in that King Juan Carlos’ image has been replaced by two castellers at the top of the traditional human tower seen at Catalan festivals.

The smaller pieces – 50,20,10,5,2 and 1 cent ones – feature an image of Catalonia’s patron saint George fighting the dragon.

The first batch of coin cases has proven to be such a success that the only ones now available are on eBay for three times the original price of €10 ($13.70).

Decorated with the red and yellow of the Catalan Senyera flag,  two written messages stand out on the collector’s box: "First attempt at minting the euro coin of the Catalan Republic" and "Ours are not legal tender".

Spain's El Mundo newspaper managed to contact the tight-lipped person behind the scheme, a man who goes by the name of Miquel but who gave nothing else away.

"Obviously we've taken advantage of the favourable situation to promote and sell the coins," he told the Spanish daily in reference to the recent call by Catalan president Arthur Mas for a referendum on the issue of independence to be held.

Miquel claims 20 percent of his coin earnings have been donated to "an entity that works towards the freedom of his country".

When asked if he thought he was breaking EU laws by minting fake currency, Miquel defended himself by saying the coins are slightly smaller and the word ‘euro’ is nowhere to be seen on the pieces.

MONEY
Black Friday in Spain: What you should be aware of
Url copied to clipboard!