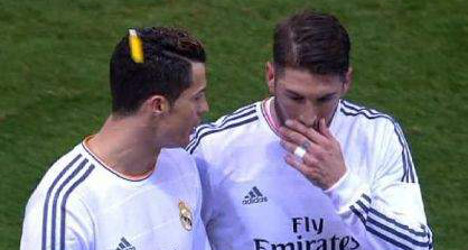 Ronaldo had scored two early penalties at the Vicente Calderon to kill off the tie, leading to frustration among the home support. Photo: YouTube

Ballon d'Or winner Ronaldo was hit by a lighter thrown from the crowd as he made his way off the field at half-time in the semi-final second leg clash, which Madrid won 2-0 to advance 5-0 on aggregate to a final against Barcelona.

Pro-Real media in the Spanish capital had called for serious action to be taken following the incident, but the RFEF said its "isolated nature" prevented them from handing down more than the small fine.

"As this was an isolated incident, in which the object that was used is not banned from sporting arenas and, fortunately, did not cause any damage or injury to the player who was struck, or interrupt the game, the incident merits a sanction to the host club of a €600 fine," said a statement released by the RFEF.

They added that the fine would have been just half that amount had Atlético identified the culprit.

Ronaldo had scored two early penalties at the Vicente Calderon to kill off the tie, leading to frustration among the home support.

He was able to continue, although he was eventually substituted quarter of an hour from the end of the game.