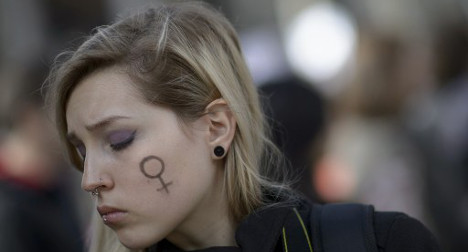 A woman with a Venus symbol on her cheek takes part in a protest against a reform of Spain's abortion law. Photo: Dani Pozo/AFP

The plan has outraged pro-choice groups and brought thousands of people out onto the streets to protest, but has sparked division even within the conservative ruling party.

Lawmakers rejected a proposal submitted by the opposition Socialists to "immediately withdraw" the bill by 183 votes to 151. Six lawmakers abstained.

The ruling Popular Party (PP) holds a strong majority in parliament, but the abortion reform, supported by the Roman Catholic Church, has been delayed amid dissent by senior party figures.

The former Socialist government brought Spain into line with much of Europe when it passed the current law in 2010, giving women the right to opt for abortion in the first 14 weeks of pregnancy.

The draft bill approved by the current government last month would allow abortion only in cases of rape that is reported to the police, or a medically-certified threat to the mother's physical or psychological health.

The Popular Party's parliamentary spokesman Alfonso Alonso said he trusted none of its deputies would break ranks in Tuesday's vote, due late in the evening in the lower house Congress.

One of the critics of the reform within the PP, the deputy speaker of the house Celia Villalobos, had called on the party to let members vote as they wish.

"We will not stop until the bill is withdrawn," Socialist leader Alfredo Perez Rubalcaba said on Tuesday.

Joan Saura, a senator from the Catalan Green party ICV, called it "a law for women's suffering, not for their rights".

The man leading the reform, Justice Minister Alberto Ruiz-Gallardon, defended the plan, saying lawmakers had to balance the woman's rights with the unborn child's.

"No right is unlimited," he said.

Thousands of people demonstrated in the streets of Madrid on February 1 and 9 in protest against the reform.

Recent opinion polls, such as one published in El Pais newspaper on January 11, indicated a majority of Spaniards disagreed with the government's plan.