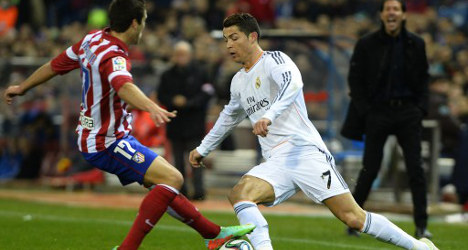 Any chance of Atletico recovering from their 3-0 defeat at the Santiago Bernabeu last week was extinguished after just seven minutes by Ronaldo. Photo: Gerard Julien/AFP

Any chance of Atletico recovering from their 3-0 defeat at the Santiago Bernabeu last week was extinguished after just seven minutes when Ronaldo opened the scoring after being upended by Manquillo.

The Portuguese star doubled his tally nine minutes later from another penalty as this time Gareth Bale was felled by Emiliano Insua.

Ronaldo's eventful evening continued as, moments after being booked for a clash with Manquillo, he was then hit by a lighter thrown by the Atletico fans as the players headed to the dressing rooms at half-time.

The Ballon d'Or winner was however fit to continue at the start of the second-half before being substituted late on.

Real will face either Barcelona or Real Sociedad in the final on April 19th with Barca holding a 2-0 advantage heading into the second leg of their semi-final on Wednesday.

Madrid coach Carlo Ancelotti insisted that Ronaldo was fine after being struck and lauded his side's feat of reaching the final on the back of eight consecutive clean sheets in the Cup this season.

"Cristiano is fine, he scored two goals and he doesn't have any problems," he said.

"We are still alive in all competitions and whilst this is the least important of the three in comparison to La Liga or the Champions League, to get to a final is always a good thing for the team.

"We have played well in all the Cup games. We have kept a clean sheets throughout and this speaks well of the mentality of the team."

Atletico boss Diego Simeone appeared to have given up any hope of an unlikely comeback from the off as he rested Juanfran, Diego Godin, Arda Turan and captain Gabi, whilst four more first-team regulars missed out through injury and suspension.

However, despite suffering three defeats in a week, Simeone is hoping for a positive reaction from his side as they too have La Liga and Champions League honours to fight for in the coming weeks.

"You are never happy to lose or go out of a competition, much less in this manner losing 5-0.

"Last year we managed to win this competition, this year we got to the semi-finals. You can always do better as a team, but now we will continue with the same desire as before and we want to remain competitive."

Ancelotti named a strong side and was rewarded with the away goal that killed the tie off when Ronaldo converted from the spot after tumbling under Manquillo's clumsy challenge inside the area.

However, it was 2-0 after just 16 minutes as this time Bale went down under a challenge by Insua and Ronaldo again struck the resulting spot-kick low into the right-hand corner of Daniel Aranzubia's net.

With the tie effectively over as a contest, the only spice was added by unfortunate events off the field as Ronaldo was struck as he headed towards the tunnel at half-time.

The former Manchester United man did return for the second period, but he was unable to complete his hat-trick before being replaced by Jese Rodriguez 15 minutes from time.

Bale and Isco both had efforts well saved by Aranzubia as Real continued to look the more likely to score after the break.

Meanwhile, at the other end, Jose Sosa's drive that forced Iker Casillas into a flying save was the best that Atletico could muster as they slipped to their first home defeat of the season.