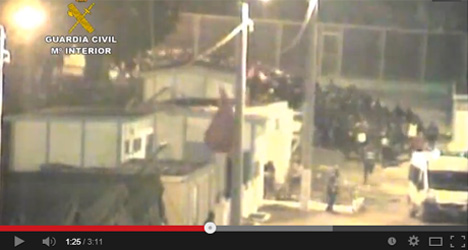 Critics of the police's actions say that the video omits the most controversial events of the day. Photo: YouTube

A police spokesman said on Monday that the video shows a group of people rushing down from the nearby mountain of Dar Kuiba, from where they headed for the Buitz bridge, a border crossing point for goods traffic.

The video has been released in response to accusations of police misconduct made by a group of NGOs who have filed an official complaint with Spain's General Prosecutor's Office.

According to Spanish daily El Mundo, the video omits the most controversial events of the day, when  armed officers are alleged to have fired rubber bullets at another group of immigrants who were attempting to swim around a breakwater to reach the beach.

This is said by survivors to have caused panic among the immigrants, many of whom were not strong swimmers.

The NGOs have also filed a complaint about a Civil Guard patrol who are said to have forced those who did swim as far as Spanish waters to return to Morocco instead of, as official procedure dictates, assisting them.

It was reported that the patrol not only refused to allow struggling swimmers to enter their boat but that they pushed them back into the water.

Police have refused to release video of these events.

The local MP, Francisco Antonio González, admitted that rubber bullets were fired and that tear gas grenades were used.

But he said that they were used only to 'dissuade', and were aimed only at those on land and not at swimmers.

He went on to describe the would-be immigrants as "very violent" and said that they "threw stones, resulting in light injuries plus damage to vehicles and a guardhouse."

He also claimed that no immigrants reached Spanish territory, but footage broadcast on Spanish TV  showed eight survivors on the Spanish coast being taken into custody by officers wearing riot gear.

The director of the Civil Guard, Arsenio Fernández, attacked critics for failing to understand the circumstances in which his officers had been working, saying "they've never done it but we're hoping that one day they will."

Despite the death toll, he described the actions of his officers as "impeccable".