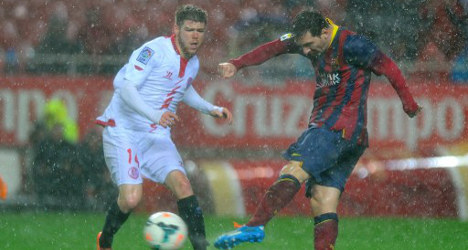 Alberto Moreno had fired Sevilla into a deserved early lead, but Barça were level in controversial circumstances when Alexis Sanchez bundled home Messi's free-kick from an offside position.

Messi then took over with a wonderful half-volley to give his side the lead at half-time.

The Argentine produced another fine finish 11 minutes after the restart before Cesc Fabregas rounded off the scoring three minutes from time.

The Spanish champions now lead a three-way tie at the top of La Liga on goal difference with Real Madrid and Atletico Madrid also on 57 points.

"To have the opportunity to recover and regain the lead just a week after losing, it is reassuring," said Barça boss Gerardo Martino.

"We start again now and we will see which of the three teams make a mistake first. We hope it won't be us again."

Martino was also pleased by his side's reaction after a dreadful opening in which they could easily have conceded three times.

"We played badly for the first 20 minutes. I wouldn't say the first-half was the worst we have played this season because we improved towards half-time and the equaliser had a calming effect on us.

"In the second-half I could see the team was playing better and in the last half an hour in particular we managed to control the game well."

Martino had sprung a surprise before kick-off by leaving Dani Alves, Sergio Busquets and Cesc Fabregas on the bench, and the visitors started extremely poorly.

Moreno's low strike was deflected past Victor Valdes by his own defender Marc Bartra, but Barça were lucky not to be further behind in the opening 30 minutes.

Carlos Bacca was unlucky to see his glancing header come back off the base of the post before Ivan Rakitic fired wide from close range with only Valdes to beat.

Barcelona were handed a lifeline 10 minutes before half-time when the assistant referee failed to spot that Sanchez was in an offside position as he turned Messi's free-kick into the net via his back.

However, there was no doubt over Barça's second as a flowing counter-attack from the edge of their own box ended with Messi volleying home his first goal from open play in 10 league games.

Sevilla had a series of opportunities to equalise at the beginning of the second-half as Vitolo shot wide when clean through before Kevin Gameiro also fired off target after Valdes had parried Bacca's curling from range.

The hosts were made to pay for their profligacy when Messi produced another precise left-footed finish in off the inside of the post from Andres Iniesta's pass.

Substitute Denis Cheryshev had another guilt-edged chance to give Sevilla hope 17 minutes from time, but he fluffed his lines allowing Valdes to smother.

Fabregas showed the Sevilla forwards how it should be done with a composed chipped finish over the stranded Beto from Sanchez's cut-back.