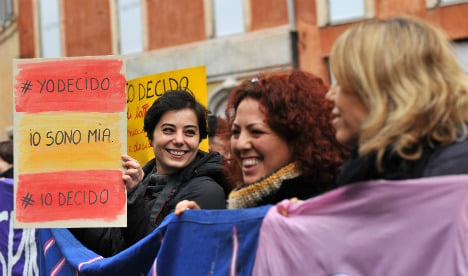 They yelled "Freedom of abortion!" and waved signs such as "MPs and rosaries, out of my ovaries", targeting the Catholic Church as the supposed driver of the reform.

Prime Minister Mariano Rajoy's government said in December it would scrap a 2010 law that allows women to freely opt for an abortion in the first 14 weeks of pregnancy.

The new legislation would allow abortion only in cases of rape or a threat to the physical or psychological health of the mother.

Protesters say the law would roll back the decades in Spain, returning to previous restrictions under which they say women seeking abortions had to go abroad for the procedure.

"The law means to take us back 40 years," said Concha Merin, 42, who travelled hundreds of miles from the Extremadura region to join the protest in Madrid.

"I have two daughters who could be affected. I am thinking of the freedoms of all women in general."

The flag-waving demonstrators, mostly women of all ages and also including minority political groups, marched past the justice ministry in Madrid.

They then massed on a central square, shouting for the resignation of the man leading the reform, Justice Minister Alberto Ruiz-Gallardon.

The bill has reportedly caused division within the ruling Popular Party and has not yet been sent to parliament, where the conservative Popular Party holds a strong majority.

The delay has drawn cries of impatience from anti-abortion campaigners and the Roman Catholic Church hierarchy.

"The Church should not interfere in politics," added protester Merin.