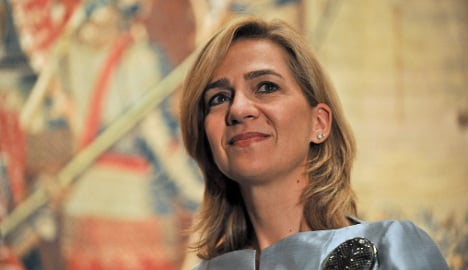 Spanish King Juan Carlos's youngest daughter was "evasive" as she testified as a criminal suspect in the Palma de Majorca court, said Manuel Delgado, a lawyer for a civil party in the case, left-wing association Frente Civico.

The first direct member of the Spanish royal family in history to face such a hearing, the 48-year-old blonde Cristina said she "had great trust in her husband", the lawyer told reporters during a break in the proceedings.

Long thought untouchable as a royal, Cristina finds herself at the centre of the scandal, accused of being complicit in the allegedly fraudulent business dealings of her husband, former Olympic handball player Inaki Urdangarin, who is also under investigation.

"Ninety-five percent of her answers are evasive. She is calm, relaxed and well prepared," the lawyer said.

"The judge is asking very rigorous questions," he added.

"She is exercising her right not to give answers that would compromise her. She is not diverging from the script we expected: she does not know, she does not answer and that's it."

The princess is accused of tax fraud and laundering allegedly embezzled money — claims that have plunged the monarchy into crisis.

Earlier, she smiled as she stepped out of a dark car, wearing a white shirt and black jacket, and walked into the courtroom, nodding to television crews, photographers and reporters crowded near the door.

Minutes after Cristina's arrival, investigating judge Jose Castro began questioning her in a courtroom overlooked by a portrait of her own father, Juan Carlos, 76.

Neither Cristina nor her husband have been formally charged with any crime and both deny wrongdoing.

Castro has spent more than two years investigating allegations that Urdangarin and a former business partner embezzled €6 million ($8 million) in public funds via a charitable foundation.

Cristina was a member of the foundation's board and with her husband jointly owned another company, Aizoon, which investigators suspect served as a front for laundering embezzled money.

State prosecutors say there is no case to answer against Cristina but the judge has admitted suits brought by pressure groups.