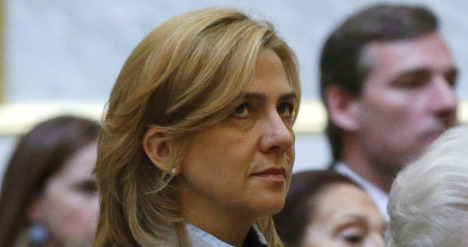 Long thought untouchable as a royal, Cristina, 48, now faces public scrutiny over accusations of tax fraud and money-laundering that have fuelled doubts over the future of the monarchy.

The judge on the island of Majorca will question Cristina, seventh in line to the throne, as a suspect in a judicial probe — one step towards a possible trial.

It is the first time in Spain’s modern history that a direct member of the royal family has been summoned to court accused of wrongdoing.

He is under investigation for alleged embezzlement of public funds. Neither he nor Cristina have yet been formally charged with any crime and both deny wrongdoing.

But the investigating judge Jose Castro wrote in his summons: “The fiscal crimes that Urdangarin is accused of could hardly have been committed without at least the knowledge and acquiescence of his wife.”

Castro has spent more than two years investigating allegations that Urdangarin and a former business partner embezzled six million euros ($8 million) in public funds via the Noos Institute, a charitable foundation he chaired.

Cristina was a member of the board of Noos and with her husband jointly owned another company, Aizoon. Investigators suspect that Aizoon served as a front for laundering embezzled funds.

Cristina, known as the Infanta, last year narrowly escaped an earlier summons, which was cancelled on appeal.

The latest summons “deals an even bigger blow to the monarchy, because it highlights that what happened last year was unjust”, said Ana Romero, a journalist who covers the royal palace for El Mundo newspaper.

Urdangarin provided a rare public spectacle when he went before Castro for questioning in February 2012, choosing to brave the yells of protestors and walk to the entrance of the court on the Mediterranean island.

For security reasons the judge has given Cristina, like her husband, permission to drive right up to the door of the court on Saturday, which would save her a humiliating walk in front of the world media’s lenses.

State prosecutors say there is no case to answer against Cristina but the judge has admitted a suit brought by Manos Limpias, a litigious far-right pressure group.

In a summons of more than 200 pages, Castro detailed suspect spending in Aizoon’s accounts, such as 437,000 euros spent renovating the couple’s luxury villa in Barcelona.

He also cited spending on salsa and merengue dance classes, tableware and a cocktail party.

The courts impounded the couple’s villa last year to cover a bond for Urdangarin’s liability in the case.

They have moved with their four children to Geneva, where Cristina was posted by her employer, a charitable foundation run by La Caixa bank.

Saturday’s hearing follows more than two years of mounting anger against the elite in a Spain battered by recession.

Juan Carlos, 76, won widespread respect for helping steer Spain to democracy after the death of the dictator Francisco Franco in 1975.

But the royals’ popularity has plunged since the case against Urdangarin opened three years ago.

The king’s woes were worsened by a luxury elephant-hunting trip he made to Africa in 2012 as his subjects suffered in a recession.

These scandals and the sight of the king looking frail on crutches in his rare public appearances have raised debate about the future of his reign.

A recent poll showed 62 percent of Spaniards in favour of his abdication. Support for the monarchy in general fell to just under half.