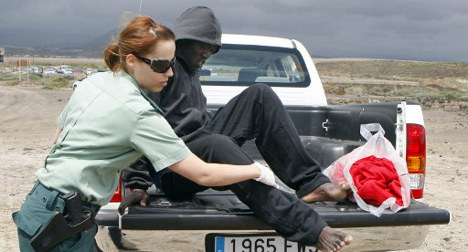 At least seven migrants drowned on Thursday as they tried to swim to the Spanish enclave of Ceuta from a beach in neighbouring Morocco, Moroccan authorities said.

The news comes just days after a video filmed by a Melilla-based NGO worker showcased how Spanish authorities were illegally handing back to Morocco dozens of sub-Saharan immigrants who had jumped the security fence into the Spanish North African enclave.

“Morocco doesn’t accept injured immigrants,” reads the video narration in reference to the controversial barbed wire put up several months ago in a bid to dissuade immigrants from crossing the border.

The law stipulates that immigrants who enter Spanish territory should be taken immediately to the closest police station where they are identified and have the right to a legal and medical assistance as well as an interpreter.

Interior Minister Jorge Fernández Díaz admitted on Tuesday that there were “isolated cases” in which Spain’s Civil Guard breached legislation.

Ceuta and Spain's other north African enclave Melilla have the European Union's only land borders with Africa.

They are seen as stepping stones to a better life in Europe for sub-Saharan migrants, who often risk their lives attempting to enter the tiny Spanish enclaves, either by sea or by storming the six metre (20 foot) barriers that separate them from Morocco.

On Sunday, the bodies of five presumed migrants thought to have been trying to reach Spain in an inflatable boat, were found in the Nador area of Morocco's northern coast, near Melilla.

According to the Rif Human Rights Association, more than 40 migrants have died trying to reach Ceuta and Melilla from Morocco in the past two years.

Many more attempt the perilous journey across the Strait of Gibraltar, often in overloaded makeshift boats.

Morocco estimates that there are around 30,000 illegal immigrants on its soil, most of them from sub-Saharan Africa.

Earlier this year, authorities launched an operation to regularize the situation by giving some of them residency permits.