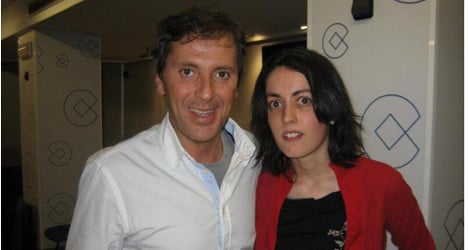 Paco González recognized Gallego immediately when police showed him a photo of her, acknowledging he had gone out with her and a group of people for drinks on at least one occasion. Photo: Twitter

His wife was driving their 19-year-old daughter to university when they were forced to stop by a man and a woman armed with knives.

A scuffle ensued when the attackers got into the vehicle, leading González’ wife receiving five stabs wounds and his daughter two.

Police have identified the aggressors as Lorena Fernández Gallego, a nurse from Valladolid, and Iván Trepana Palao, a friend of hers who is reported to have been in love with her.

According to Spanish news agency EFE, Paco González recognized Fernández Gallego immediately when police showed him a photo of her, acknowledging he had gone out with her and a group of people for drinks at least once.

The radio presenter also told EFE he knew Fernández Gallego because she was a regular caller to his programme.

Sources close to the investigation believe she was obsessed with González, former presenter of Spain’s most popular sports radio show Carrusel Deportivo.

There are also indications Fernández Gallego and Trepana may have been behind the hate mail sent to González a year earlier.

González’s wife and daughet are recovering at a local Madrid hospital and are reported to be in a stable condition.