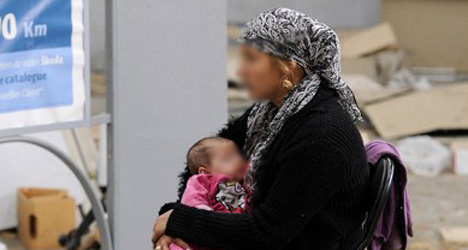 Official records stated that the woman was screaming in the street and that she kicked the baby's buggy, knocking it over in an area where vehicles were passing. File Photo: Boris Horvat/AFP

In addition to the two-year sentence, the two officers were also ordered to pay €1,500 ($2,026) in fines for making false accusations and complaints, as well as for falsifying official documents.

The officers had been sent to investigate reports of 'a Romanian woman begging with her daughter' outside a supermarket on April 19th, 2010, according to local daily El Periódico.

They found the Roma woman with a child they identified as being two months old.

According to the court, they then acted with "manifest disregard for the truth" and accused the woman of child abuse, despite there being no evidence for this whatsoever.

They stated in their official records that the woman was screaming in the street and that she kicked the baby's buggy, knocking it over in an area where vehicles were passing.

The officers went on to falsely state that the woman struck the baby girl "several times" without "any kind of care, before grabbing her and squeezing her roughly against her chest."

They also claimed in their incident report that they had struggled with the mother to ensure the safety of the baby in the crowded area.

After forcefully taking custody of the child, the officers called for an ambulance which took the baby to hospital "to determine the extent of her injuries".

The woman was arrested and formally accused of begging with children, and of striking her daughter.  She was also prevented from making any contact with the girl.

Social services took custody of the child until legal proceedings against the mother were complete.

But doctors at the hospital who had received the baby found absolutely no evidence that the baby had ever suffered any kind of mistreatment, and a forensic investigation revealed no trace of abuse.

This forensic evidence, plus statements from numerous witnesses, led a judge to remove the injunction against the mother, but the administrative protection procedures in place meant that they were separated for eight months, until December 2010.