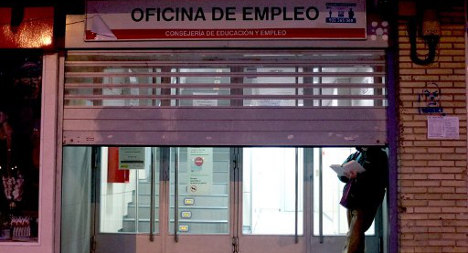 Prime Minister Mariano Rajoy's conservative government hailed the result as a sign that the labour market is steadying as the economy emerges from a double-dip recession sparked by a 2008 property crash.

The number of people registered as unemployed rose month-on-month by 113,097, or 2.41 percent, to 4.81 million in January, according to raw figures from the Labour Ministry.

It was the smallest increase for January since 2007, the report said.

The January figures were "significantly better" than the average of previous years, said Engracia Hidalgo, the state secretary for employment.

"They confirm the trend of stabilization of the labour market that began in May 2012," she said in a statement.

After correcting the figures to smooth out seasonal blips, the the jobless queue actually fell by 3,907 people in January, the government report said.

Spain's economy, the fourth largest in the eurozone, emerged haltingly from its downturn last year, posting growth rates of just 0.1 percent in the third quarter and 0.3 percent in the final quarter.

The official unemployment rate edged up to 26.03 percent in the final quarter of 2013, according to a separate household survey run by the National Statistics Institute.