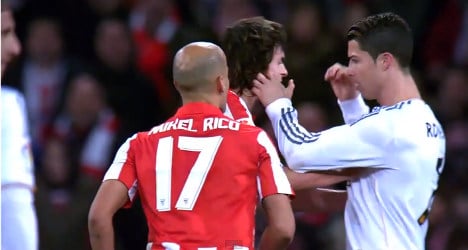 The referee's report after the match said Ronaldo had kicked and smacked opponents. It also said Real's star player mocked one of the linesmen. Photo: YouTube

The Ballon d'Or winner was shown a straight red card by referee Ayza Gamez 15 minutes from time at San Mames after a clash with Athletic defender Carlos Gurpegi.

The competitions committee of the Spanish Football Federation (RFEF) are due to meet on Wednesday to decide on the length of Ronaldo's ban, but he will only miss that night's Copa del Rey semi-final first leg against holders Atletico Madrid at the Santiago Bernabeu if the suspension is four matches.

Anything else and the Portuguese star would only serve his ban in La Liga, starting with this weekend's home meeting with Villarreal.

"I am sure that the committee will not be too serious with Cristiano. I don't think the gesture was so bad," said Ancelotti at his eve-of-game press conference.

The referee's report after the match, cited by Spanish media, said that Ronaldo had "hit an opponent in the face with his hand while play was stopped", Athletic's defensive midfielder Ander Iturraspe.

The report also accused Ronaldo of insulting the officials, stating that, "after being sent off and while he was leaving the field, slapped his own face several times with the palm of his hand in the direction of the fourth official."

Ancelotti added: "The player was not happy and I think the red card was over the top after he had been provoked, just as he is in every match.

"Cristiano is a player who is fouled a lot and is constantly being provoked."

Wednesday's game but he did confirm that Gareth Bale was available again after returning to training following a leg knock.

Raphael Varane is also available after making his first appearance in more than two months at the weekend following recurring problems with his right
knee.

"Varane is fine, his knee has completely recovered," said the coach. "He might play tomorrow (Wednesday), otherwise he will play on Saturday. He feels in great shape."