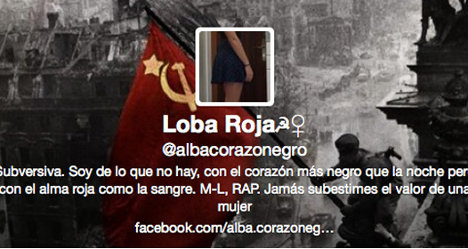 Alba González's lawyers were able to reach an agreement with the attorney's office by which she will only go to prison if she commits another crime.

The 21-year-old, whose name on Twitter is @albacorazonegro (Alba Black Heart) and Loba Roja (Red Wolf), sent out thousands of messages which, according to Spain's High Court, encouraged acts of terrorism and violent behaviour.

González’s tweets were mainly in relation to GRAPO, a clandestine terrorist wing of Spain’s Communist Party which carried out over 80 murders in the late 1970s and early 1980s.

The group disbanded in 2007 after numerous arrests and dwindling support.

In her tweets, González called for their return to action:

"The PP (Spain’s governing party) taught me that there is still a great need for the GRAPO," read one of her messages.

"Andrea Fabra I hope GRAPO come and bring you to your knees," González wrote in another, as a reference to a politician who was caught saying "screw them" during a parliamentary debate on budget cuts and unemployment.

Her hatred for the governing right-wing PP is also seen in a message in which she promised to tattoo on herself "the face of whoever puts a bullet in the back of Rajoy (Spanish PM) and de Guindos’ (Economy Minister) head," online daily Periodista Digital reported on Monday.

She even went as far as sending out a message to Basque terrorist group ETA: "Since you have laid down your weapons you might give them to us, we need them."

Despite her sentence, González has kept her Twitter account open and still sends out regular tweets to her 11,300 followers.