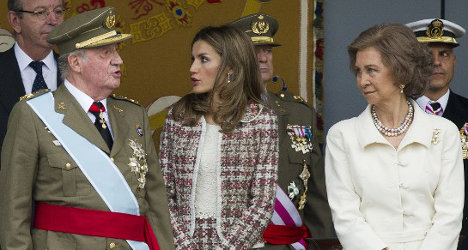 The Bourbons agreed to open up their account books for public scrutiny for the first time in April 2013. Photo: Dominique Faget/AFP

It’s the first time the 76-year-old monarch has willingly made information on royal earnings available to Spain’s general public.

In a press release published by Spain’s Zarzuela Palace, the newly-fixed wages of royal family members have been disclosed in detail.

Queen Sofía of Spain will earn €131,739 in 2014, a sum roughly resembling her wages last year but which is no longer determined by so-called representation costs.

As for Letizia Ortiz, wife of Prince Felipe and future queen of Spain, she will receive a grand total of €102,464.

“It’s more transparent, fair and professional to do it like this,” a royal spokesperson told Spanish daily El País.

Spain’s Royal Family has also publicized the total cost of King Juan Carlos’ three hip and back operations in 2013: €165,189.

The Bourbons agreed to open up their account books for public scrutiny for the first time in April 2013, after an ongoing fraud scandal involving the King’s youngest daughter made their popularity drop to an all-time low.

The palace will now give full details of how it intends to spend the €7.7 million it will receive this year from the Spanish government under the country's new Transparency Law.

The sum represents a 2 percent drop in the royal income compared with the previous year, a decision which also saw King Juan Carlos and his son Felipe take a salary cut.

The ageing monarch now earns € 292,752 a year and his son and heir exactly half that amount.