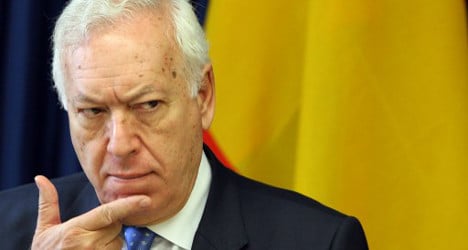 Margallo made the comments in an interview with the Financial Times, an article which has since been widely covered by the Spanish press. Photo: Petras Malukas/AFP

Margallo made the comments in an interview with the Financial Times, an article which has since been widely covered by the Spanish press.

“If Scotland becomes independent in accordance with the legal and institutional procedures, it will ask for admission (to the EU),” he told the FT.

“If that process has indeed been legal, that request can be considered. If not, then not.”

Although Margallo did not clarify whether Spain would veto Scotland’s entry to the EU after an independence vote, he did state there would be no interference in other countries internal affairs.

“If Britain’s constitutional order allows – and it seems that it does allow – Scotland to choose independence, we have nothing to say about this,” the Spanish Foreign Affairs minister stated.

The 69-year-old still labelled Scottish nationalists as unrealistic in their claims that EU membership was guaranteed in the event of independence in March 2016.

He argued Scotland would have to “join the waiting line and ask for admission.”

Margallo’s words come as Spanish Prime Minister Mariano Rajoy continues to pledge he will use the country’s Constitutional Tribunal to block any attempt by Catalonia to hold a referendum.

Under its leader Artur Mas, the pro-Catalan independence movement has gained support over the past three years, with roughly half of Catalans saying they want to separate from Spain.

But Madrid remains staunchly against the referendum vote, labelling it as unconstitutional.

Margallo’s last move against Catalan independence was to order all Spanish envoys abroad to explain why secession is not the answer for Catalonia or Spain.