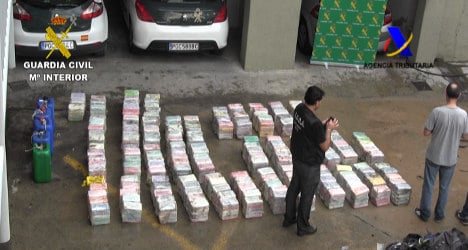 "The cocaine was hidden inside 37 rucksacks that had been anchored with a sophisticated flotation and tracking system so that they could later be picked up from the sea," a police statement said.

Officers arrested five Spaniards in raids on a gang suspected of trafficking the drugs and money-laundering in the cities of Valencia and Malaga, the statement added.

Police believe the drugs were destined for the Costa del Sol, a southern region of beaches around Malaga that is popular with foreign tourists.

Police did not say how much the drugs were worth. They also seized 72,000 euros ($97,000) in cash as well as jewellery, luxury watches, vehicles and a boat.

The hiding of the drugs in waters off a beach in the eastern city of Valencia was the latest in a series of increasingly creative ruses by traffickers.

Police in Spain have reported finding drugs hidden under smugglers' wigs and inside their bodies in breast implants, as well as in cargos such as bananas, roses and cakes.

In December, they caught a fugitive Colombian vet who tried to smuggle liquid heroin by surgically implanting plastic bags of the drug into live puppies. In that case the drugs were intended for the United States.

Spain is one of the main points of entry for cocaine into Europe from its former colonies in Latin America.

In 2012 overall, Spanish authorities said they seized 20 tonnes of cocaine, which equalled more than 40 per cent of the total seized in Europe that year.