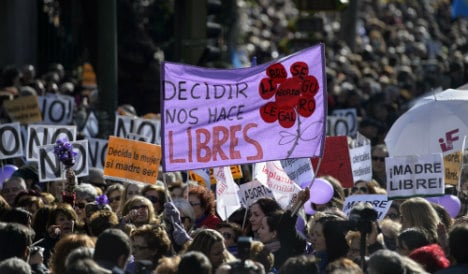 Demonstrators shouting slogans and carrying banners that read "It's my right, It's my life" crowded around a Madrid station to greet a "freedom train" of activists from northern Spain for the country's first major protest against the plan.

Under pressure from the Catholic Church, Prime Minister Mariano Rajoy's conservative government announced on December 20th it would roll back a 2010 law that allows women to opt freely for abortion in the first 14 weeks of pregnancy.

The new law — yet to pass parliament, where the ruling People's Party enjoys an absolute majority — would allow abortion only in cases of rape or a threat to the physical or psychological health of the mother.

The move has outraged pro-choice campaigners, who say the legislation would roll back the decades in Spain, returning to conditions similar to those of a more restrictive 1985 law or even the 1939-1975 dictatorship of Francisco Franco.

"I would never have imagined we would find ourselves back here, fighting for something we thought we had won," said 57-year-old protester Maria Pilar Sanchez.

Marisa Vallero, 55, recalled how she had to fly to London 35 years ago to have an abortion. "We were treated like terrorists," she said.

The "freedom train" left Gijon in northern Spain on Friday with around 100 pro-choice campaigners on board.

The group joined up with thousands more protesters from elsewhere in Spain, but also from other countries including France, to protest outside parliament.

Opposition politicians joined the march, including United Left party leader Cayo Lara, who said the proposed law represented only "the most fundamentalist sectors of the religious hierarchy and the most fanatic Francoists".

The new bill would toughen the conditions for aborting in cases of malformation of the foetus, which the current law authorises freely up to 22 weeks.

It would also oblige girls aged under 18 to get their parents' consent to have abortions.

Protests were also held in Britain and France against the planned Spanish law change, echoing one in Brussels that drew hundreds of people Wednesday.

In London, about 100 mostly Spanish protesters gathered on the South Bank of the River Thames in a show of solidarity, leaving coat hangers — the symbol of backstreet abortions — decorated with slogans tied to the Golden Jubilee Bridge.

Several thousand pro-choice demonstrators also marched on the Spanish embassy in Paris, some with knitting needles, another clandestine abortion symbol, in their hair.

Smaller protests were held in around 30 other French cities.

French Social Affairs Minister Marisol Touraine said last week the Spanish plan would "take women back to the Stone Age" and called for action to ensure it was rejected.

French lawmakers last month approved a controversial abortion bill that scraps a requirement for women to prove they are in distress to legally terminate a pregnancy.

In Spain, Rajoy's government has repeatedly postponed the abortion reform, reportedly struggling with internal dissent, after promising in its 2011 election campaign to tighten the rules.

The delay has drawn cries of impatience from the Roman Catholic Church hierarchy.

Last April, the head of Spain's Catholic Church, Cardinal Antonio Maria Rouco Varela, said the 2010 law had "led to a rise in the number of abortions to terrifying levels".

Campaigners dispute the effect of the legal changes on abortion numbers.

Proponents of the bill have called their own demonstration for Sunday in Madrid to fight what they call a "phobia of family".