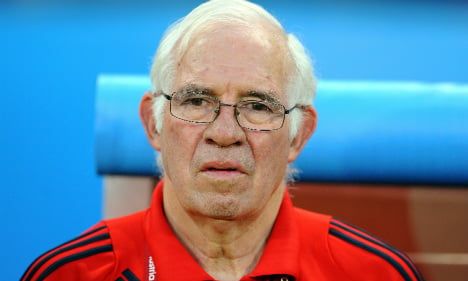 "The RFEF is sorry to announce the death of Luis Aragones," read a statement on their website.

"The RFEF wants to express its pain and consternation at the death of a man who was a player and coach at a number of Spanish clubs and around the world, and the Spanish national team coach at the beginning of its most glorious era of success at international level."

As well as the Spanish national side, Aragones managed 10 different clubs during a 35-year coaching career and also had a decorated playing career.

He is most fondly remembered at Atletico Madrid, where he won three league titles as a player and one as a coach in the 1976/77 season.

"Luis Aragones was a great player and coach, but more than that a great person and friend," said the Atletico president Enrique Cerezo in a statement on the club's website.

"He was an Atletico man above all else. I want to express on behalf of all those at the club our condolences to the family."

His crowning glory came on the international stage, though, in Austria and Switzerland in 2008 when he guided the until-then perennially underachieving Spanish national side to their first major tournament victory since 1964.

"One of the most influential people I have known has gone and someone to who football should be grateful," said Iker Casillas, who Aragones made captain of the side in 2006.

"Personally, I owe him a lot. He influenced me a lot from the age of 26 on. I have always had a lot of love for him and it appears the feeling was mutual.

"I want to send my condolences to his family. Luis will always be in a privileged position in the history of our football."

Despite emerging victorious over Germany in the final in Vienna, Aragones stood by his pre-tournament decision to step down as Vicente del Bosque took over to guide Spain to their first World Cup in 2010 before retaining their European title two years later.

"Without doubt, he led the way in this extremely successful era," said Del Bosque.

"It is a sad day for our football. We have lost a key man in the history of modern sport."

Aragones returned to management just once after leaving La Seleccion, at Turkish side Fenerbahce, but his reign was short lived as he was sacked after a disappointing first season in charge.

Tributes to Aragones poured in from those he was in charge of throughout his illustrious career.

"Today someone who has made an impression as much on me as a person as in my professional career has left us. Rest in peace boss. Thank you for everything," Barcelona midfielder Cesc Fabregas posted on social networking site Instagram alongside a picture of himself and Aragones.

"One of the greats has left us, it is a very sad day," added Real Madrid's Xabi Alonso on Twitter.

Former clubs Atletico and Sevilla have also announced they will wear black armbands in their La Liga matches this weekend.

Although widely revered in Spain, Aragones's coaching career was not short of controversy, most notably in 2004 when he was accused of using racist language to describe then Arsenal forward Thierry Henry in a bid to motivate Henry's club teammate Jose Antonio Reyes.