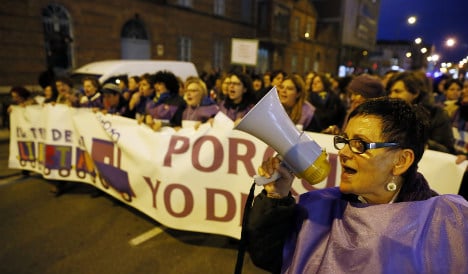 A "freedom train" of protesters from northern Spain was due to arrive in Madrid later Saturday morning while supporting protests were also planned in Paris and London.

Under pressure from the Catholic Church, Prime Minister Mariano Rajoy's conservative government announced on December 20 it would roll back a 2010 law that allows women to opt freely for abortion in the first 14 weeks of pregnancy.

The new law, yet to pass parliament where the ruling People's Party enjoys an absolute majority, would allow abortion only in cases of rape or a threat to the physical or psychological health of the mother.

The "freedom train" left Gijon in northern Spain on Friday, carrying on board pro-choice campaigners who say the government's move will take the country back to the 1980s.

The aim is "to tell conservative (Justice) Minister Alberto Ruiz-Gallardon that we don't want him to change the law," said Begona Pinero, whose feminist group came up with the idea for the journey.

"We the women are free and we are capable of deciding when we want to become a mother," she told AFP.

Her group will join up with thousands more protesters from elsewhere in Spain but also from other countries including France, to protest in front of parliament.

Protests are also expected elsewhere in Europe, notably in the British and French capitals.

In Paris pro-choice adherents will march on the Spanish embassy, without the protests organised in cities including Bordeaux, Marseille and Strasbourg — a total of 30 French towns — according to a feminist group.

She called for action to ensure that "this proposal is not accepted."

French lawmakers last month approved a controversial abortion bill that scraps a requirement for women to prove they are in distress to legally terminate a pregnancy.

Hundreds of people, 2,000 according to organisers, protest in Brussels on Wednesday against the planned Spanish law change.

In Spain Prime Minister Mariano Rajoy's government has repeatedly postponed the abortion reform, reportedly struggled with internal dissent, after promising in its 2011 election campaign to tighten the rules.

The delay has drawn cries of impatience from the Roman Catholic Church hierarchy.

Last April, the head of Spain's Catholic Church, Cardinal Antonio Maria Rouco Varela, said the 2010 law had "led to a rise in the number of abortions to terrifying levels".

Campaigners dispute the effect of the legal changes on abortion numbers.