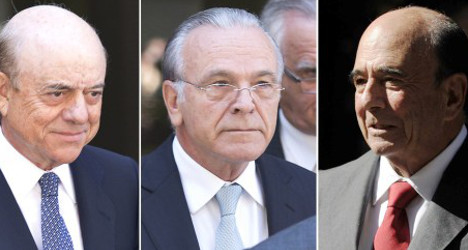 Santander, BBVA and CaixaBank said they had emerged stronger from banking troubles that led to a 41-billion-euro ($56 billion) rescue of their weaker rivals in Spain.

All Spanish banks have had to set aside money for losses on assets, pounded by the collapse in 2008 of a decade-long property boom.

At the same time, they have been obliged to boost the ratio of rock-solid core capital on their balance sheets.

Analysts say risks remain in the sector, with doubtful loans rising in November to 13.08 percent of all credit extended by Spanish banks, the highest since records began in their existing form in 1962.

But the top flight of the sector appears to be emerging from the crisis.

Both Santander and BBVA said they were relying on overseas markets to make up for Spain, where unemployment tops 26 percent and domestic demand remains weak as the economy emerges from five years of stop-start recession.

Santander, the largest in the eurozone by market value, reported Thursday a 90.5-percent leap in net profits to €4.37 billion in 2013.

"After several years of strengthening the balance sheet and capital, Banco Santander is embarking on a period of strong profit growth in the coming years," Santander chairman Emilio Botin said.

Santander said the 2013 results marked a "turnaround" after the declining profits of recent years.

It aimed within three years to regain the profitability it enjoyed before the financial crisis struck in 2008, Botin said.

One of Spain's largest banks, BBVA, announced Friday a 33-percent leap in net profit for 2013 despite suffering losses in the final quarter.

Net banking income fell 3.4 percent over the same period to 14.6 billion euros, said BBVA, the second-largest in Spain by market value and third-largest by assets under management.

"The outlook for 2014 has improved significantly and at BBVA, we are in an excellent position to respond to the growth of the solvent demand for credit," BBVA chairman Francisco Gonzalez said in a statement.

However, the bank reported a net loss of €849 million in the final three months of 2013, caused by the loss-making sale of a 5.1 percent stake in China Citic Bank, worse than expected by financial markets, compared to a €20 million profit in the same period a year earlier.

An improvement in the banking business in Spain is "on the horizon", BBVA said.

CaixaBank, whose business is more focused on Spain, revealed Friday that its net profits had climbed by 119 percent to 503 million euros in 2013 as it sought cost savings after setting aside large sums for bad loans and absorbed two troubled lenders.

CaixaBank net banking income rose by 2.1 percent over the same period to €3.95 billion.

Despite the banks' optimism, investors had anticipated better results in the final quarter of 2013.

Spain obtained a €41.3 billion eurozone rescue loan in 2012 to shore up the balance sheets of fragile institutions under a financial sector programme, which it exited on January 23.

Under the programme, the hardest-hit Spanish banks transferred many of their dodgy assets to a "bad bank", called Sareb, which is pooling the bad assets so as to sell them at a discount.