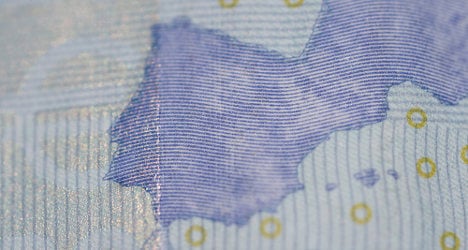 Despite an unemployment rate topping 26 percent, Spain's economy grew by 0.3 percent in the final quarter of the year after edging up 0.1 percent in the previous quarter, the National Statistics Institute said in a preliminary report.

"The recovery we started to see in the third quarter of last year is strengthening," De Guindos said in an interview with Cope radio.

"It is a sign, a sign of hope. It is still very little, it needs more time, it need to strengthen," the minister said.

The growth rate, albeit modest, was the fastest since the start of the Spanish economic crisis five years ago, he said.

Spain's economy shrank by 1.2 percent over the whole of 2013, however, the report showed, as the nation struggled with the shattering aftermath of decade-long property bubble that imploded in 2008.

De Guindos, who is predicting Spanish economic growth of about 1.0 percent in 2014, said that recent raw data showed signs of jobs growth emerging in the
last quarter of 2013.

"These are positive signs and they show that we have left the recession behind although there is still a lot to do," the minister said.

"The path ahead is full of curves, of difficulties, most of all the unemployment rate of 26 percent," he said.

In the final quarter of 2013, Spain's economy benefited from exports, even though they declined a little, the latest figures showed.

The negative impact of weak domestic demand eased a little, too, the report said.

Though avoiding a widely feared economic rescue in mid-2012, Spain's government obtained a 41.3-billion rescue loan from the eurozone to save tottering banks, whose assets had been hammered by plunging property values.

Besides slashing spending to rein in Spain's yawning public deficits, the government reformed the labour market in 2012 by cutting dismissal costs and making it easier to change work conditions.

Analysts say those reforms should make it easier to create jobs as the economy swings back to growth.

It is unclear, however, how fast the economy must grow to make a real dent in the jobless queue, which amounted to 5.9 million people unemployed in the last quarter of 2013.