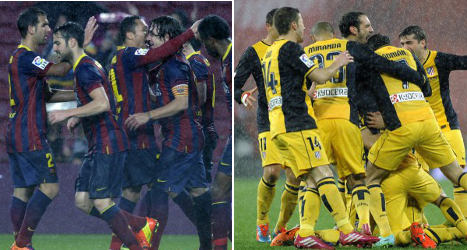 Barcelona also assured their place in the last four with a 5-1 victory over Levante at the Camp Nou to seal a 9-2 rout on aggregate.

In Bilbao, Aritz Aduriz had powered the hosts into a deserved lead four minutes before half-time and Athletic were only denied a bigger advantage at the break by two outstanding saves from Thibaut Courtois.

However, Atlético regrouped at the break and levelled 10 minutes after the restart when Raul Garcia smashed home Emiliano Insua's cross.

Diego Costa sealed their passage into the last four in the final stages as he slotted home his first goal of 2014 on the counter-attack to inflict Athletic Bilbao's first ever defeat at their San Mames ground, which they have used since the start of the season.

Atlético will travel to the Santiago Bernabéu, where they beat Real 2-1 in last year's final, for the first leg of the semi-final next week with the return to come at the Vicente Calderon the following week.

"In the first 30 minutes we were in control of the tie, if not the match, said Atlético boss Diego Simeone.

"From then until half-time they had a great end to the half, but we came out strong in the second-half and got the goal which gave us confidence and strength."

However, they are unbeaten in four meetings against Madrid and Barcelona this season and the Argentine feels his side now believe they can compete with Spain's big two.

"This season we will play four more games against Barcelona and Real Madrid and that is good because it tests you more, but you also lose the fear of playing in those games."

Barcelona's passage into the semi-finals was far smoother as they thrashed Levante at a sodden and sparsely populated Camp Nou.

Sergi Roberto's early own goal had given the visitors some hope of an improbable comeback from last week's 4-1 defeat.

However, that was quickly extinguished as Adriano's long-range strike and Carles Puyol's thumping header gave Barca the lead on the night before half-time.

Two goals in quick succession after the break from close range by Alexis Sanchez extended the hosts lead.

Cesc Fabregas rounded off the scoring as his low effort beat Javi Jimenez at his near post 21 minutes from time.