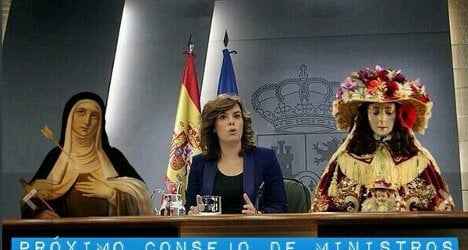 – How does the Minister for the Interior think Saint Teresa of Avila is interceding on behalf of Spain?

– What is the role of Virgin of Rocío in the exit from the crisis?

– Does the government believe there are more divine and supernatural interventions affecting the current state of Spain? What are they?

These are just some of the tongue-in-cheek questions the left-wing Basque political party Amaiur asked of the Government on Tuesday.

The questions came after Spain's Interior Minister Jorge Fernández Díaz said recently he believed Spain's Saint Teresa was intervening on behalf of Spain during the crisis.

"Saint Teresa spoke of difficult times and I am sure that she is being an important mediator for Spain in these tough times we are going through," said the minister at Spain's top tourism fair Fitur.

The remarks by Fernández Díaz unleashed a frenzy of social media activity with some commentators creating images of the saint's political role. Saint Theresa acting as the Speaker of the House in the Spanish Parliament. Photo: Facebook

The interior minister is not the first Spanish Government minister to call on the suggest divine forces are at play in the country's plight.

In 2012, Employment Minister Fátima Báñez praised the Virgin of Rocío for helping Spain "along the road out of the crisis.

But the questions posed by Amaiur had a serious purpose too.

"Does the government believe they are respecting the secular nature of the State?" the party asked in its letter to the ruling Popular Party?

"Does the government plan to push for a religious State?" Amaiur concluded.

Spain is a secular state but religion continues to play an important part in the everyday life of the country in the form of baptisms, communions, weddings and funerals..

A 2005 Eurobarometer poll found only 59 percent of Spaniards believed in God and 21 percent in a higher power, or close to Europe averages.