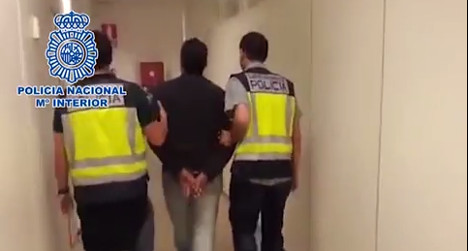 Liberty Reserve founder Arthur Budovsky (centre) is alleged by the US Justice Department to have laundered more than $6 billion (€4.4 billion) for criminals. Photo: Spanish National Police.

Budovsky is accused of being the "principal founder" of Liberty Reserve, a Costa Rica-based digital currency service alleged by the US Justice Department to have laundered more than $6 billion (€4.4 billion) for criminals.

"I opposed his extradition and called for him to be released," Budovsky's lawyer Gonzalo Boye told AFP after a hearing at the National Court in Madrid, Spain's top criminal tribunal.

He added that Budovsky's legal team was planning to counter-sue US prosecutors for making what he said were false allegations about Budovsky's role in the company.

"When we asked them to provide details of who had laundered money, they were not able to give one single piece of data," he said.

Boye added that the warrant for Budovsky was not issued in accordance with the extradition treaty between the United States and Spain.

The Spanish court must now decide whether to enforce Budovsky's extradition to the United States.

Budovsky told the court he had renounced his US citizenship after marrying a Costa Rican woman and acquiring her nationality, a court source said.

On May 24th, 2013, Spanish police arrested Budovsky as he stepped off a flight from Morocco to change planes en route to Costa Rica.

Four other suspects have been arrested and two are said to be at large in Costa Rica.

The suspects face possible jail sentences of up to 30 years in what US authorities say is the biggest money-laundering case they have ever handled.    The US Justice Department said after the arrests that Budovsky had "directed and supervised" Liberty Reserve.

It accused the company of providing electronic money services to one million users worldwide who had conducted 55 million transactions since its foundation in 2006, "virtually all of which were illegal".

Boye said his client had created the computer system used by the fund and set up the operation in 2006 but sold it in 2007 and served as a "technical adviser" until 2009.