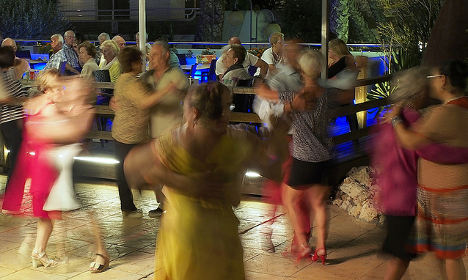 British tourists flocked to Spain in the greatest numbers in 2013 and spent a total of €12.0 billion ($16.4 billion), or about one-fifth of the total. Photo: Dainis Matisons

Foreign tourists in Spain pumped a record €59.08 billion ($80.82 billion) into the Spanish economy in 2013, new figures from the country's Industry, Energy and Tourism ministry show.

That's a massive 9.6 percent higher than a year earlier.

Daily spend by tourists was also up 3.3 percent to a €109 while tourists splashed out an average €976 on their holidays in Spain, or a rise of 3.7 percent year-on-year.

"Spain closed 2013 with a historic record in international tourism spending," the tourism ministry said in a statement.

The higher number of international tourists — up 5.6 percent from 2012  — was the reason for the results, the ministry added.
British tourists, who flocked to Spain in the greatest numbers, spent a total of €12.0 billion, about one-fifth of the total.

They were followed by the Germans who splashed out €9.7 billion and the French who spent €5.9 billion, the government said.

Russian tourists boosted spending by the greatest margin, lifting expenditure by 29 percent to €2.35 billion in 2013, accounting for four percent of the total, it said.

Spain announced last week it had taken the world's number three spot for international tourists in 2013, overtaking China by luring a record 60.6 million visitors, up 5.6 percent from the previous year.

Spain now stands behind only France with 83 million international tourist arrivals and the United States with 67 million, it said.

The tourism industry said it benefited last year from misfortune in Egypt, where political turmoil scared away visitors.

Spain's economy emerged from a two-year downturn by posting 0.1-percent growth in the third quarter of 2013.

The government estimates that it grew by 0.3 percent in the final quarter of 2013, despite being dragged down by an official unemployment rate of more than 26 percent.

The new tourism earnings figures are derived from the Egatur survey into tourism spending in Spain.