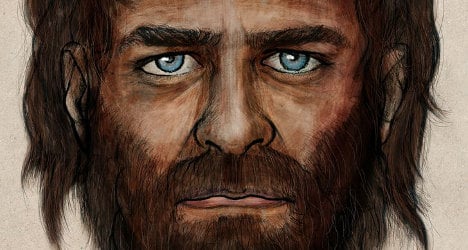 The man, who was about 1.70m tall and aged 30 to 35, was a Mesolithic hunter-gatherer. Photo: An artistic impression provided by CSIC, Spain's National Research Council

Led by a team of biologists in Barcelona, the study is part of an ongoing effort to uncover the DNA of ancient humans on the European continent.

Their most recent research has been centred on the fossilized remains of a Stone Age man unearthed in a cave near the north-western Spanish city of León in 2006.

The scientists, from Barcelona's Institute of Evolutionary Biology, have now analysed the man’s tooth and determined he was part of a breed closely related to modern-day Scandinavians but with the dark-skinned genes of an African.

What makes the brand new findings so relevant is that researchers had previously assumed that the blue-eyed gene was brought over by foreign invaders some 5,000 years ago.

Evidence now suggests that blue eyes were already common among the continent's early hunter-gatherers, along with darker skin.

The biologists are yet to conclude the precise skin tone he had but have been able to determine he had lactose-intolerant genes, a sign which proves he was more likely to have been a hunter-gather than to have had contact with domesticated livestock.