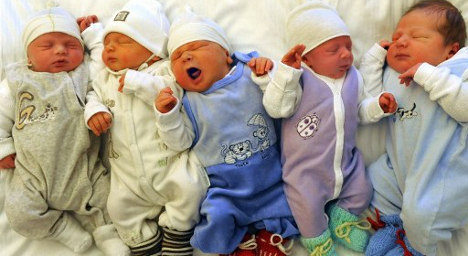 The authors of the study say the economic impact of Spain's draft abortion law is difficult to quantify and "should not be directly associated with its approval". Photo: Waltay Grubitzsh/AFP

The claims were part of a draft "impact analysis" study into the effects of Spain's new abortion reform, put together by the country's justice ministry.

Spain’s conservative Popular Party hopes the planned legislation would boost the country’s birth rate rise as abortions would only be possible in cases of rape or when the mother’s life was seriously at risk during pregnancy.

The authors of the study do remark however that the new draft law’s "economic impact is difficult to quantify" and "should not be directly associated with its approval" as that is not its primary objective.

Spanish radio station Cadena Ser reported on the document's contents on Monday but highlighted the figures used to reach the study’s conclusions "were wrong and have not been updated".

The government green-lighted its draft abortion bill on December 20th but Spain's Ministry of Health on December 23rd released data showing that the number of abortions carried out in Spain actually fell from 118,000 in 2011 to 112,000 in 2012.

The memo — which Cadena Ser described as "highly ideological" — also states Spain's abortion law will do away with "eugenic abortions".

In the document, the Ministry of Justice justified the decision to ban abortions in cases where babies have birth defects by citing a United Nations document which calls a "for difference and acceptance of persons with disabilities as part of human diversity and humanity".

Spain's proposed abortion laws are yet to be passed but the ruling Popular Party has a strong majority in the country's parliament .

The draft bill have garnered criticism within the country and abroad.

While thousands of pro-lifers gathered in Madrid to celebrate the passing of the draft bill, protests against the changes have been held across Spain.

"No-one can deny anyone the right to be a mother and no-one can oblige anyone to a be mother either," José Antonio Monago, the Popular Party head of government in the western region of Extremadura, said in an end-of-year address on Monday.

"Extremadura supports a reform of the abortion law by consensus," he added.

"The message to the people of Extremadura is clear and firm: remove any ideological dimension from fundamental matters," he said, in a reference to health and education.

The Popular Party head of the Galicia regional government, Alberto Núñez Feijóo, has also called for the abortion bill to be changed to win broader support.