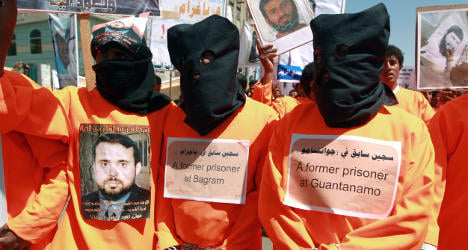 Yemenis demand the release of Guantanamo Bay inmates on hunger strike in 2013 outside the US embassy in Sanaa. File photo: Mohammed Huwais/AFP

In a move that Spain's El País newspaper is calling a massive blow to universal justice, the Spanish Government is looking at shutting down up to a dozen international cases involving genocide, torture and war crimes.

The outcry from the national daily come after the Spain's ruling conservative Popular Party (PP) revealed it was eyeing changes to the country's legal system which would mean the country's courts can only investigate crimes either involving Spaniards or taking place on Spanish soil.

But lawyers say the reforms could spell the end of up to a dozen high profile international cases including possible Chinese genocide in Tibet in the 1980s and 1990s and alleged torture of prisoners at the US military prison of Guantanamo Bay in Cuba.

"This news is sad because Spain has been something of a beacon in the fight for human rights with its investigations into human rights abuses in countries like Chile and Argentina," Ignacio Jovtis of Amnesty International told The Local.

"Once again Spain is putting its political and economic agendas above human rights," he added.

The proposed changes could also see the end of Spanish legal investigations into the persecution of China's Falung Gong sect and possible CIA use of a Spanish airport to transport 'illegal' prisoners.

The Spanish Government had defended the changing, saying the changes are in line with its ratification of the statute of the International Criminal Court.

Most of the cases affected, however, involve countries which have not ratified that statute, including the US and China, El País newspaper pointed out.

Spanish legal investigations into torture at Guantanamo Bay and genocide in Tibet have caused serious diplomatic tension with the US and China.

Last November, Spain's National Court authorized the arrest of former Chinese President Jiang Zemin and four of his officials, a decision which angered the Asian superpower.

Spain's ambassador in Beijing was called in by the Chinese Government and Spain threatened with economic reprisals, the ambassador said.

The court's public prosecutor is now looking to have the arrest order overturned citing procedural issues.