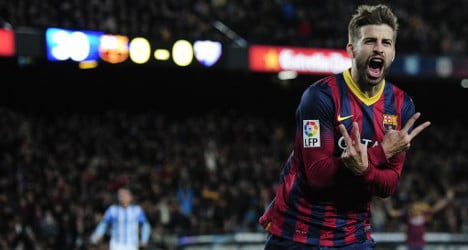 Pedro Rodriguez then made the game safe with a neat turn and finish from Lionel Messi's pass 10 minutes after the restart.

Alexis Sanchez slotted home the third moments later from Pedro's cross for his 12th goal of the season.

However, it was to be another frustrating evening for Messi in front of goal as his La Liga goal drought stretched to eight games.

Click here for all the latest sports news from Spain

Atletico Madrid remain level on 54 points with the Catalans as they were 4-2 victors at Rayo Vallecano earlier on Sunday with both leaders a point ahead of third-placed Real Madrid.

Sanchez came within inches of giving Barcelona the perfect start as his chip over Willy Caballero came back off the post after a fine through ball from Cesc Fabregas.

Victor Valdes then had to beat away Duda's free-kick at the other end, but Barca were soon back on the attack and Messi nearly had his much-desired goal when he also dinked the ball beyond Caballero only to see it drift just past the post.

However, it was only a matter of time before Barcelona made the breakthrough and it was Pique who was in the right place to fire home Sanchez's knockdown for his second goal in as many league games.

Caballero kept the hosts at bay at the beginning of the second period as he made fine saves from Sanchez and Fabregas, whilst Pique headed another Xavi corner off the post.

Pedro finally found a way past the Argentine keeper as he received Messi's pass before cutting inside to curl the ball accurately into the bottom corner.

Another Messi dash started the move that led to the third goal as he again fed Pedro and this time the Spanish international squared for Sanchez to tap home.

Atletico kept up the pressure on Barca with a comfortable win of their own at struggling Rayo.

David Villa put the visitors in front after just eight minutes with his 11th goal of the season, but Diego Simeone's men were thankful to goalkeeper Thibaut Courtois moments later as he saved Jonathan Viera's penalty.

The visitors restored their two-goal cushion before half-time, though, as Turan slotted home Gabi's free-kick from a tight angle at the back post.

Saul Niguez's then put through his own net under pressure from Costa to make it 4-1 before Joaquin Larrivey's headed consolation rounded off the scoring.

With top-scorer Costa still to score in seven games in 2014, Villa's return to goalscoring form has come just at the right time and he slotted away the opener confidently from Costa's unselfish cut-back.

And Spain's all-time leading scorer was delighted to net his second goal in as many league games.

"I am very happy to be able to help the team get the victory and score a goal," said Villa.

"It is very important to continue winning, particularly away from home."

Athletic Bilbao also enhanced their chances of playing Champions League football next season with a crushing 5-1 win over Osasuna to move five points clear of Villarreal in fourth.