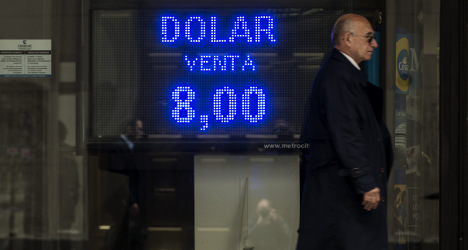 A currency exchange board in Buenos Aires: fears of turmoil in emerging economies were sparked after Argentina's peso slumped by 14 percent in two days recently. Photo: Leo La Valle/AFP

The worries over markets such as Argentina and Turkey come as the euro is overcoming the worst of its debt crisis.

"I think they're quite different, separate issues," Dijsselbloem told reporters ahead of a meeting in Brussels of finance ministers from the 18 countries that use the euro.

"I don't think that there will be any contagion coming from those kind of risks in emerging economies back to the eurozone, no," the Dutch finance minister added.

"The case of Argentina is singular. The exposure of Spanish companies is much lower, Argentina is a special case," he told reporters in Brussels.

Fears of turmoil in emerging economies were sparked last week after Argentina's peso slumped by 14 percent in two days.

Turkey's central bank announced it would hold an extraordinary meeting on Tuesday as the lira slides further against the euro and the dollar.

The ruble has also fallen heavily.

Asian stocks sank on Monday following sharp falls in Europe and the worst losses on Wall Street in seven months on Friday.

In Paris, French central bank chief Christian Noyer agreed that the eurozone was unlikely to be affected.

"There is no reason that Europe should be particularly hit by problems in a small number of emerging countries," he said.

"I think they can fix them fairly quickly."

The head of Germany's central bank or Bundesbank, Jens Weidmann, who was also in Paris, said the troubles in the emerging markets were a "call to carry out reforms."