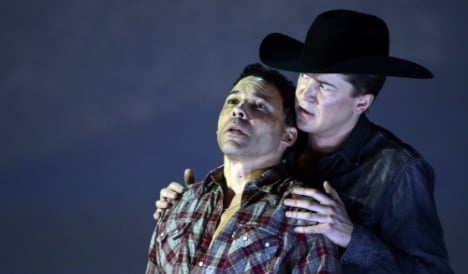 The tragic love story of Jack and Ennis, played in the 2005 picture by Jake Gyllenhaal and the late Heath Ledger, comes to Madrid's Teatro Real in an English-language production that has drawn comparisons to Wagner.

The Canadian bass-baritone Daniel Okulitch as the hesitant Ennis and American tenor Tom Randle as his devoted Jack play out their tale of secret love in homophobic 1960s Wyoming against a photographic backdrop of brooding mountains.

At a dress rehearsal ahead of Tuesday night's world première, their voices soared over New York composer Charles Wuorinen's score, the orchestra sounding ominous and frenetic by turns as the doomed romance moved to its climax.

"The whole opera is about a typical kind of impossible situation, a tragic situation," said Wuorinen, who called on the writer Annie Proulx, author of the novella on which the film was based, to write the libretto.

"In this case, it's two people who in some way want to have a relationship which in their time is forbidden by society," Wuorinen told AFP.

"That's a very traditional operatic problem to deal with."

The billing is no coincidence, said the theatre's Belgian director, Gerard Mortier, who saw parallels between the cowboys and the mythical knight and princess of Richard Wagner's masterpiece.

"The importance of Annie Proulx's novel is that 'great love' is 'great love' even if social reflections and conventions are opposed to it," he said in notes accompanying the production.

"Therefore I programmed the world première next to the production of Tristan and Isolde," he added.

"Tristan, Isolde, Jack, Ennis — they all don't understand what's happening to them but are all prepared to die for the love they feel."

Coming down from the mountain where they kindle their love while minding sheep one summer, the two cowboys part and start families, but Jack tries to persuade Ennis that they two should live together.

Brooding woodwind and angry brass and drums echo the roughness of the local landscapes and speech.

"The music, the text, the production: all of this is non-sentimental," Wuorinen said.

"What all these things are instead are dramatic, tragic. There just isn't any room for sentimentality."

The Pulitzer Prize-winning composer, 75, said he was "more interested in the fundamental human problem" of the characters than in making a show about gay rights.

"I would not want the opera to be thought of as an ideological or propaganda piece," he said. "But if it helps, that's fine."

Dressed in cowboy hats and boots, putting up tents and drinking by a campfire before falling into each others' arms, Jack and Ennis sing a punchy libretto peppered with swear words.

"I ain't no queer," booms Ennis, in denial after spending the night in Jack's tent.

The composer was not afraid of displeasing traditional audiences at one of Europe's top opera houses.

"If you have a preconception of opera as this decaying form in which everything comes from the 19th century and you have an idea of overweight women yelling into the house, it's quite possible that this piece might not be suitable," said Wuorinen.

"It's not my problem, it's their problem."