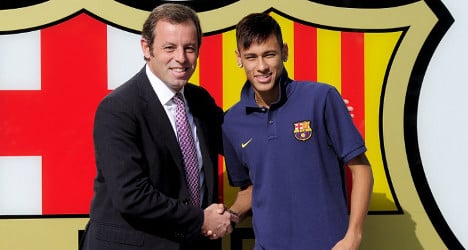 Rosell has come under increasing pressure after a club member accused him of refusing to divulge who received money from Neymar's signing in 2013. Photo: Josep Lago/AFP

The 49-year-old had come under increasing pressure in recent weeks as he faces legal action, launched by one of the club's own members, over his role in the signing of Brazilian star Neymar last year.

Rosell has routinely insisted that the 21-year-old cost the club € 57.1 million ($77 million), but refused to divulge how much money each of the parties to the deal received on confidentiality grounds.

That led Jordi Cases to launch the case against Rosell last month for not informing the club's members as to where the money for the transfer had gone.

The capture of Neymar was a significant political coup for Rosell. A former Nike executive in Brazil, Rosell played a key role in bringing two-time World Player of the Year Ronaldinho to the club in 2003 in his role on the board of previous president Joan Laporta.

His relationship with Laporta soon broke down, though, as he left along with incoming president Josep Maria Bartomeu, who was then in charge of basketball operations at the club, following irreconcilable disagreements with Laporta in 2005.

He returned to the club in 2010, succeeding Laporta by winning by the presidential elections by greatest margin in the club's history with 65.5 percent of the vote.

Given his business links in Brazil, Neymar was the perfect marquee signing for Rosell and he made a move as early as November 2011 to ensure the former Santos man would end up in Catalonia by agreeing a deal with a business owned by Neymar and his father called N&N to bring the player to Barcelona when his contract expired in 2014.

However, as La Liga rivals Real Madrid circled around Neymar last summer, Rosell's desperation not to be outdone by Real president Florentino Perez may have significantly increased the outlay made by the club.

According to the court resolution released on Wednesday, Barca paid €40 million to N&N for breaking the previous agreement to complete the player's signing in 2014 and bringing it forward by a year.

That deal flew in the face of Rosell's previous economic handling of the Spanish champions.

Once elected he quickly set about reducing the club's huge debt left behind by Laporta's reign.

A feat he impressively managed, reducing the debt by €100 million , whilst maintaining a more than competitive side on the field which won six trophies during his time in charge.

However, many felt he was willing to sell the club's soul in his quest to balance the books.

Under Rosell's tutelage Barcelona finally succumbed to becoming world football's last major power to have a commercial sponsor on their shirts.

A bumper deal signed with Qatar Sports Investment in 2010 for €171 million firstly saw The Qatar Foundation replace UNICEF on the famous blaugrana shirt before Qatar Airways took over the sponsorship this season.

However, by prioritising the club's finances, Rosell made some unpopular decisions within the dressing room and the club's fanbase.

In particular, the decision to not renew the playing contract of Eric Abidal last summer months after he had returned to action from a liver transplant was seen as lacking the warmth with which Laporta had previously built up strong relations with the club's stars.

That trend followed last month when in an uncharacteristic outburst, Lionel Messi slammed Rosell's economic vice-president Javier Faus a being a man "who knows nothing about football" and who "treats Barcelona like a business, which it is not."

The more popular and charismatic Laporta, who is expected to launch a bid to return as president in 2016, also joined in the cries for Rosell to explain himself to the club's fans on Wednesday.

And with his credibility amongst the club's members at an all-time low, it seemed only a matter of time before Rosell finally fell on his sword.