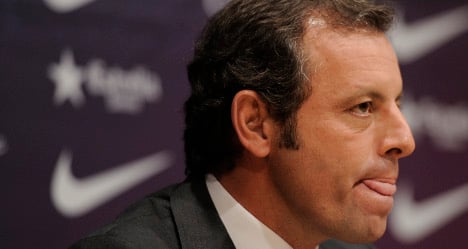 Pressure had mounted on Rosell since a judge agreed to hear a case against him relating to alleged misappropriation of funds in the deal which brought Neymar to the club: Josep Lago/AFP

Pressure had mounted on Rosell, 49, after a judge agreed on Wednesday to hear a case made against him by one of the club's own members for alleged misappropriation of funds in the deal which brought Neymar to the Camp Nou last year.

Sporting vice-president Josep Maria Bartomeu will replace Rosell as president for the remainder of the board's mandate, which runs until 2016.

Rosell once again defended his position on the Neymar signing by describing the complaint made against him as reckless.

SEE ALSO: Own goal: How Rosell fell on his sword

"From the first day I have said that the signing of Neymar was done correctly and it has provoked jealousy from some of our rivals," he told a press conference at the Camp Nou.

"I don't want an unjustified attack to negatively affect the image of the club and therefore I believe my time at the club has come to an end.

"I have presented my irrevocable resignation to the board."

Bartomeu will now take over and dismissed rumours earlier in the day that presidential elections could be called in June.

"My first message as the new president of Barca is to announce the continuity of our project until 2016," he said.

"We continue with the utmost desire and commitment to maintain the sporting, economic and social excellence of our club."

Rosell has routinely insisted that Neymar cost the club €57.1 million ($77 million), but refused to divulge how much money each of the parties to the deal received on confidentiality grounds.

That led Jordi Cases to launch the case against Rosell last month for not informing the club's members as €40 million of the fee was supposedly paid to a business owned by Neymar and his father called N&N.

The club were subsequently asked to submit the contracts that sealed the player's arrival in Catalonia, as well as Barca's financial accounts for the past three years.

And the judge, Pablo Ruz, decided that the documentation handed over reveals "sufficient elements" for an investigation to go ahead.

On top of the €57.1 million attributed by the club for the signing, Barca also paid Santos €7.9 million for the first-option to buy three youth team players and €9 million for playing two friendly matches, the documentation for which Ruz has also now requested.

Rosell's popularity among the club's supporters and indeed some senior players has been on the wane for some time.

His decision to cash in on a commercial sponsor on the club's shirt for the first time in its 111-year history shortly after becoming president in 2010 was decried by many as selling out on Barça's "more than a club" motto.

More recently the failure to offer defender Eric Abidal an extension to his playing contract at the end of last season shortly after returning from a liver transplant was seen as lacking compassion with Dani Alves even changing his shirt number to the number 22 previously worn by Abidal as a tribute to the Frenchman.