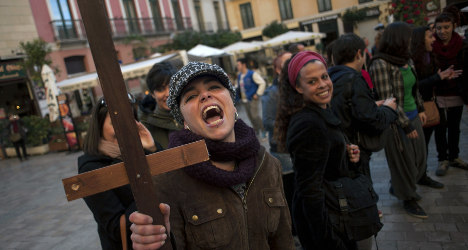 A woman demonstrates in Malaga on Thursday against new Spanish cardinal Fernando Sebastian for his labeling of homosexuality as a curable "defect". Photo: Jorge Guerrero/AFP

Spanish association Colegas has filed an official complaint with a court in the southern city of Malaga after cardinal-elect Fernando Sebastián said homosexuality was a curable illness.

"To say that homosexuality is a defect is not an insult: it helps because in many cases of homosexuality it is possible to recover and become normal with the right treatment," said the cardinal-elect during his controversial recent interview with Spanish local daily Diario Sur.

Now Colegas, which represents lesbians, gays, bisexuals and transsexuals, wants the case brought before a judge.

Colega President Antonio Ferre believes Sebastián, who will take office in the Vatican in February, has broken article 510 of Spain's penal code.

This legislation allows for fines and for sentences of one to three years in prison for acts which provoke discrimination, hate or violence against groups based on their sexual orientation.

"Spain is a modern country and a secular one, and these types of declarations from the church have to be punished because they (members of the church) are the least qualified to talk about sexual deficiencies, above all because they have hidden cases of child abuse and paedophilia," Ferre said after filing the complaint.

"If they accept the Lord and have good will, who am I to judge them? They shouldn't be marginalized," the Pope said.

In October, the Vatican also announced it planned to poll Catholics on their views on issues including homosexuality.

But Sebastián, who is originally from northern Pamplona and currently lives in Malaga, said his own stance did not contradict that of the pontiff.

"The pope is very respectful and holds all people in high esteem but [he] doesn't betray or change the traditional teaching of the church," said the new cardinal in his interview.

"It's one thing to be compassionate towards a homosexual person and another thing to morally justify the practice of that homosexuality," he said.