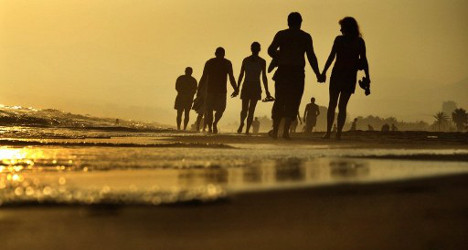 Money can influence sexual satisfaction, but not just in terms of how the wealthy can invest their money in better quality lovemaking. Photo: Sascha Schuermann/AFP

The report by investigators at Barcelona's Public Health Agency (ASPB) used data from interviews carried out with 9,850 Spanish women and men.

Their findings showcase the influence money can have over sexual satisfaction, but not necessarily in terms of how the wealthy can invest their money in better quality lovemaking.

"The level of sexual satisfaction among women from disadvantaged backgrounds or who didn't complete their primary education was 82 percent, 11 percent less than their privileged counterparts in the same 16 to 44 age bracket," ASPB researcher Dr Gloria Pérez told The Local.

Dolores Ruiz, the main author of the sexual study, points out that one of the main reasons why poor women particularly find sex more stressful is because "people with a lower socioeconomic status are always those who use less contraception."

"Once again, it's women of a lower socioeconomic status who suffer more experiences of sexual abuse," Ruiz adds.

The team of researchers from Barcelona have also concluded that people with a higher socioeconomic status seem to have a better awareness of their own needs and a greater capacity for developing their sexuality in a way which they find satisfying.

Although the study found the overall sexual health of Spaniards to be very high, with roughly 90 percent of men and women claiming to be very satisfied or quite satisfied with their intimate relationships, Ruiz has called for the implementation of new policies that close the inequality gap for women.

"They usually suffer more experiences of sexual abuse than men and they claim to have less sexual gratification during their first sexual intercourse," she explains.

According to the World Health Organisation (WHO), sexual health "is a state of physical, emotional, mental and social well-being in relation to sexuality".

It requires a "positive and respectful approach to sexuality and sexual relationships, as well as the possibility of having pleasurable and safe sexual experiences, free of coercion, discrimination and violence".

PARTNER CONTENT
Spring is in the air, could romance be too? A new survey has the answers
Url copied to clipboard!