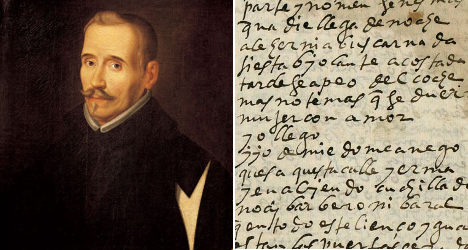 Felix Lope de Vega is widely regarded as being one of the Western world's finest dramatists. Photo: Wikimedia/Spanish National Library

A 17th-century manuscript of the play, "Mujeres y Criados" (Women and Servants), was identified within the library's archives in Madrid by Alejandro Garcia Reídy, a researcher specializing in Lope de Vega at the Universidad Autonoma de Barcelona, library and university officials said.

Never published before, the work written in 1613–14 can be seen online and is to be staged later this year by the Fundacion Siglo de Oro (Golden Age Foundation) for the first time in nearly four centuries.

The play, written by Lope de Vega at the peak of his theatrical success, tells the story of two sisters in Madrid, Violante and Luciana, and their secret lovers Claridan and Teodoro, one a waiter and the other a secretary to a certain Count Prospero.

Complications begin when two new suitors arrive on the scene — Count Prospero himself, who chases Luciana, and the wealthy Don Pedro, who courts Violante with her father's approval.

"This comedy reaches out to today's audience as  well," said Garcia Reidy, an assistant professor of Spanish at Syracuse University in New York.

"Some scenes are more proper of a vaudeville show, a theatrical genre whose mechanics and rhythm are still quite popular," he said in a statement issued by the Universidad Autonòma de Barcelona.

"Many of the scenes have their complexity, which is very promising, coming from a theatre play from the Golden Age."

Lope de Vega, a prolific playwright and poet who is widely regarded as being one of the Western world's finest dramatists, included the play in a list of works in 1618 but it had been believed lost.

The Spanish National Library had acquired the manuscript in 1886 when it bought the Library of Osuna.

"Several internal elements of the text and the relation the manuscript has with data in documents from that period confirm that the text was written by the 'Phoenix of Wits'," Garcia Reidy said, referring to the playwright's nickname.

Though the 56 sheets are in a relatively modern binding, they are "without a doubt" a handwritten copy of Lope de Vega's work set down in 1631 by Pedro de Valdes, a theatre director who staged Lope de Vega's play, he said.

Garcia Reidy, a renowned Golden Age researcher, is already working on an annotated edition of the text, to be presented in the next few months, the Barcelona university said.

"This is a very important discovery," said Alberto Blecua, director of the Barcelona university research group.

"Although attributing works to certain authors is always subject to possible controversies, the well-known prestige of the researcher and the validity of his arguments make me think that there will be unanimity among the scientific community," he added.

Born in Madrid, Lope de Vega (1562-1635) is credited with hundreds of plays, many of them considered masterpieces.

The work can be seen here:

A digitized copy of the manuscript can by clicking on this link.